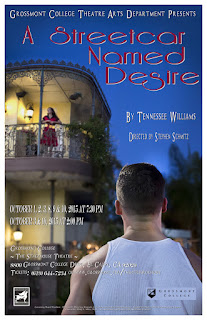 The 2015-16 Grossmont College Theatre Arts season featuring student cast members and crew opens Thursday, Oct. 1 with “A Streetcar Named Desire,” one of the most celebrated plays of the 20th century.
The play by Tennessee Williams captured the New York Critic’s Circle Award for Best New Play and the Pulitzer Prize for Drama following its 1947 debut. It is an unflinching look at post-World War II America reflected in the crumbling fantasy world of a wistful Southern belle. With her checkered past, Blanche DuBois comes to stay with her sister and brother-in-law in a working-class neighborhood of New Orleans and tensions quickly escalate.


Directed by Theatre Arts instructor Stephen Schmitz, “A Streetcar Named Desire,” takes the Stagehouse Theatre stage at 7:30 p.m. Oct. 1-3 and 8-10, with matinee performances at 2 p.m. Oct. 3 and 10.
The rest of the season’s lineup is as follows:

Tickets for the season’s plays are $15 for general admission, $12 for faculty, staff seniors and military and $10 for Grossmont College and Cuyamaca College students. Tickets can be purchased online, by phone or in person. The box office is open 10 a.m.-2 p.m. Monday-Friday and one hour prior to all performances.
In addition to the regular theatrical season, several special events are on tap: