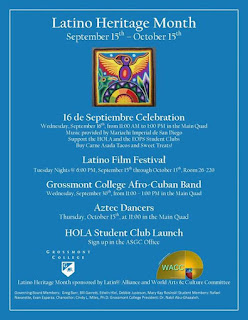 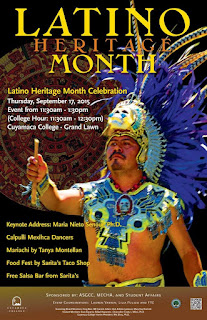 President Ronald Reagan signed Hispanic Heritage Month into law on Aug. 17, 1988, expanding on National Hispanic Heritage Week, which was signed into law by President Lyndon Johnson on Sept. 17, 1968.
Sept.15 was chosen as the starting point for Hispanic Heritage Month because it is the anniversary of independence of five Latin American countries. In addition, Mexico, Chile, and Belize celebrate their independence on Sept. 16, 18, and 21, respectively.
One year after Hispanic Heritage Month was established, Congressman Representative Dale Kildee of Michigan spoke for many when he noted that it not only recognized Hispanic-American contributions to U.S. culture, “we are also commemorating the growth of our Nation’s culture, vastly broadened and enriched by its Hispanic citizens.”
Grossmont College is located at 8800 Grossmont College Drive in El Cajon and Cuyamaca College is located at 900 Rancho San Diego Parkway in the community of Rancho San Diego near El Cajon.
Posted by Della Elliott at 10:14 AM