Grossmont College is hosting a free screening of “Underwater Dreams,” an inspirational documentary about the sons of undocumented Mexican immigrants who built an underwater robot as Arizona high school students in 2004 and defeated engineering powerhouse MIT in an international competition. 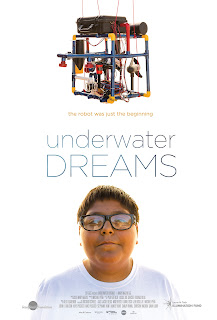 The screening of the film on Tuesday, April 12, in Building 26, Room 220 will be followed Thursday, April 14, with a panel discussion at Griffin Gate in Building 60 with two of the former high school students featured in the documentary, Lorenzo Santillan and Luis Aranda, and the winning team’s coach, Allan Cameron. Both events start at 6:30 p.m. and are open to the public. Grossmont College is at 8800 Grossmont College Drive in El Cajon.

The  2014 documentary about the ragtag team from Carl Hayden High School near Phoenix, Ariz., and its underlying theme of grit and determination overcoming obstacles was written and directed by Mary Mazzio and is narrated by actor Michael Peña. It was screened in 2015 at the White House as part of National Robotics Week.


Counselor and Associate Professor Dave Dillon at Grossmont College will introduce the film and its panelists, providing an academic perspective on social issues touched on in the documentary, such as the difficulties faced by young Latinos whose immigration status places their futures into question.


The event sponsors are the Foundation of Grossmont and Cuyamaca Colleges, the Grossmont College Office of Student Success and Equity, the Undocumented Student Taskforce, and the office of Professional Development.

Santillan was a member of the 2004 Carl Hayden underwater robotics team that won the Marine Advanced Technology Education (MATE) ROV Competition in 2004. He graduated from Carl Hayden High School in 2006 and today runs a small catering business in Phoenix with Aranda. Santillan comes from a family with mixed immigration status and is an active member of the Arizona Dream Act Coalition, an immigrant youth-led organization focusing on the fight for higher education and immigrant rights.

Aranda graduated from Carl Hayden in 2004 and attended the Scottsdale Culinary Institute. He lives and works under DACA (Deferred Action for Childhood Arrivals), the federal immigration policy that allows certain undocumented immigrants who came to the United States as minors to work or attend school without fear of deportation for a limited period.

Cameron, who joined fellow teacher Fredi Lajvardi to create the robotics team that was the improbable victor in the matchup against MIT, retired from teaching in the Computer Magnet program at Cal Hayden High School in 2006. He and his former students founded the Arizona Dream Act Coalition and in 2007, he testified before the House Judiciary Committee’s Subcommittee on Immigration, Citizenship, Refugees, Border Security and International Law.
Posted by Della Elliott at 1:51 PM