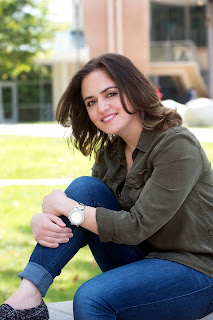 Amaziing stories arise out of the graduating classes of Grossmont and Cuyamaca colleges every year. Here's one about an Iraqi refugee whose images of her war-torn motherland are forever seared in her mind. They're what inspires her to want to help people.

Sandy Adwer is graduating from Grossmont College with an Associate of Science degree in human biology. In the fall, she will be attending the University of California, San Diego, where she will pursue a bachelor’s degree, also in human biology, with plans to eventually attend medical school to become a physician.

Nearly a decade has passed since the then-12-year-old and her family were forced to flee the turmoil and violence of Iraq, where they were in peril as sectarian crossfire ravaged their homeland. Sandy lived for the next five years in Syria. Her father ventured on his own to Sweden to try to find refuge for his family, only to be denied residency. He returned to Syria, which soon was thrust into the tragedy of its own civil war.

Exposed to the sounds and sights of war from the time she was 9, the seeming hopelessness of her circumstances ripped her soul. But war’s chaos also planted a seed in young Sandy’s mind that she wanted to someday become a doctor to aid the afflicted.
“There was a huge explosion near my house back in Iraq and I ran outside and saw all these people bleeding and screaming in pain,” Sandy said. “I was 9 or 10 years old and I knew I had to help these people. There was a grocery store next to my house and I went there begging the shopkeeper for bandages and supplies to treat the wounded. Afterward, the man turned to my mother and told her that someday, this little girl will grow up and be a healer.”

At age 17, Sandy finally left Syria with her family, headed to America with refugee assistance from the United Nations. But the years of violent upheaval had taken their toll and Sandy arrived on U.S. soil, filled with overwhelming despair. She retreated inside herself and not even the opportunity to start up her long-delayed education as a Grossmont High School student countered her depression and debilitating self-doubt.

But then, after graduating high school, came her introduction to Grossmont College and what Sandy describes as the reawakening of her spirit. 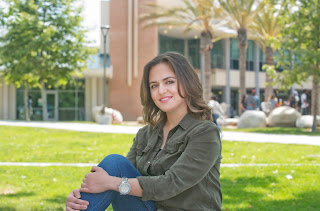 “It was like I was born again,” said Sandy, who this year reaches the five-year threshold that will allow her to apply for U.S. citizenship. “Grossmont College completely changed my life and for the first time in my life, I was filled with hopes and dreams.”

She describes as her heroes people like Veronica Romero, an evaluations adviser at Admissions and Records, as well as Brian Wolsey, Michael Perez, and Peal Lopez, all counselors at Extended Opportunities Programs and Services, which helps disadvantaged students.

In addition to getting hired as a student worker in the EOPS office, Sandy said it was the encouragement and advice of faculty and staff that made her realize her own potential.

The science curricula was especially challenging at first because she never taken even an introductory biology class until she arrived at the college. But she studied hard and was a stellar student because the obligation she felt to her parents for sacrifices made on behalf of the family.

Drawn out of her shell by counselors and others at Grossmont College, Sandy became more engaged with the campus, serving student government and joining the Science Club and the EOPS Club. She also volunteered translating for Iraqi patients at a local doctor’s office.

When the opportunity arose for Sandy to compete for the coveted role as the student commencement speaker, she didn’t hesitate.

“I have a story that needs to be told,” she said. “I am strong and confident and have such a bright future, thanks to what I have gotten here at Grossmont College. If I can help inspire one student out there and help them realize they can do anything they set their hearts to, that is my mission.”
Posted by Della Elliott at 10:00 AM