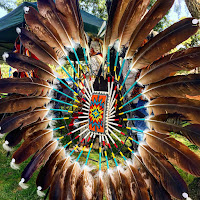 Cuyamaca College’s Native American Student Alliance is hosting its 4th Annual Powwow on Saturday, Feb. 3, from 10 a.m. to 8 p.m. at the Communication Arts complex quad in the center of the picturesque Rancho San Diego campus. The free, public event celebrates American Indian culture with a variety of activities including bird singing, gourd dancing and storytelling steeped in spiritual significance.

“Today’s powwows really help bring an awareness of Native American culture to the surrounding community and help expose the larger population to the history of our people,” said Teka Tsosie, who helped organize the first Cuyamaca College Powwow four years ago and is a former president of the Native American Student Alliance. “It’s really gratifying to see how this event has grown over the years.”


The word powwow is the Anglicized version of the Algonquian term pau-wau, or pauau – which means “he dreams” – and referred to a religious gathering of medicine men and spiritual leaders. Over the years, the term powwow has become associated with any gathering of Native American people, and the modern-day powwow is rooted in a Pawnee religious ceremony that was practiced in the early 19th century. Southern California tradition has been to include bird singing, which tell the history of the people.

The Cuyamaca College Powwow gets under way with a blessing, bird singers, and gourd dancers. The grand entry, which includes inter-tribal dances, is set for noon.

Powwows vary among reservations and regions, and planning for a powwow often begins up to a year in an advance by a powwow committee. The Cuyamaca College Powwow’s head staff, which runs the event, includes Ral Christman (from Viejas) as master of ceremonies, and Richard DeCrane (Crow/Navajo) as the arena director who is in charge during the event. The Asha Takuk Bird Singers, a Kumeyaay Tipai Bird Song and Dance group from the Viejas and Santa Ysabel reservations, will share the traditional song of the Kumeyaay. The Calpulli Mexihca Aztec Dancers will be featured during a dinner break.

Cuyamaca College has a long history of supporting Native American students and Native American studies. Its name comes from the Kumeyaay phrase “Ekwiiyemak” – which means “behind the clouds,” “above the rains,” and “the place where the rains come from the heavens” – and the campus is located on what was once tribal land. Cuyamaca College, which had long offered a certificate of achievement in Kumeyaay Studies, last fall broke new ground when it launched an associate degree in Kumeyaay Studies, becoming among the first community colleges in California to offer a degree program focusing on the language, culture and history of a specific Native American tribe.