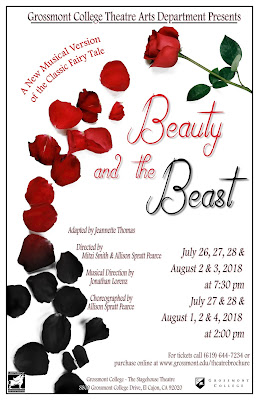 
Now in its fifth year, the summer conservatory allows student performers and technicians to learn what it’s like to work in a professional theatre in daytime and evening classes. Students are taught specialized skills that include acting, costume design, lighting, set design and marketing at one of the most respected college theatre programs in the region. The program is free for the nearly 50 high school and college students taking part.


“The Grossmont College Theatre Arts Department includes a number of working professionals who are well known in the local arts community, and the summer conservatory is a great opportunity for both high school and college students to learn from the best while earning college credit,” said Beth Duggan, chair of the Theatre Arts Department. “We are really pleased with this year’s production, which promises to best one yet.”

Conservatory courses began June 11. Performances are scheduled  at 7:30 p.m. on July 26, July 27, July 28, Aug. 2 and Aug. 3 at 7:30 p.m. and July 27, July 28, Aug. 1, Aug. 2 and Aug. 4 at 2 p.m. Tickets are available through the Theatre Arts Department page on the Grossmont.edu website. General admission is $15, tickets for seniors and members of the military are $12, and tickets for students of the Grossmont-Cuyamaca Community College District are $10. Tickets can also be purchased by calling (619) 644-7234.
Patrons arriving at Grossmont College may note construction of a new performing and visual arts center adjacent to the Stagehouse Theatre, and that has resulted in the Theatre Arts Department office moving to a portable building at the southeast corner of Lot 1.


The 2018 conservatory – which is funded entirely by donations from the community – is just one of several Grossmont College Theatre Arts programs aimed at building interest in the arts among youth around the region. The annual DramaFest brings together scores of high school theatre students from across the county for a daylong series of acting workshops co-sponsored by the San Diego Educational Theatre Association. In addition, the Theatre Arts Department also produces an annual tour of San Diego County high schools through its successful “Inside the Actor’s Process” program.

Posted by Grossmont-Cuyamaca Community College District at 10:49 AM