Regina White was tired of struggling to make ends meet waiting tables and working in low-wage sales jobs. So she came to Grossmont College to find a new career.


Good thing. Thanks to Grossmont’s Cardiovascular Technology program, Garcia is flourishing as a cardiovascular tech at the Balboa Naval Center’s cardiac catherization lab.


“Being a CV tech is one of those careers that flies under the radar when looking at the medical field, but it’s fascinating work and it pays very good money,” White said. “And when it comes to training CV techs, Grossmont College is the gold standard.”


In fact, Grossmont College has graduated more than 2,000 cardiovascular technologists since launching its program in 1972. The passing rate for graduates who take a credentialing exam is 100 percent, and close to 90 percent of students in recent years are working in a field that –  according to the federal Bureau of Labor Statistics – pays an average wage of more than $72,000 annually in San Diego County. 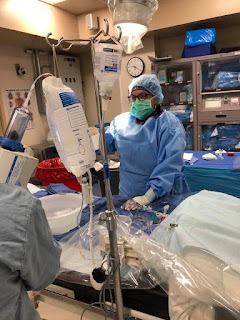 White initially enrolled in the Telemetry/Electrocardiographic Technician program when she came to Grossmont College in fall 2013 shortly before turning 44 years old. Her plans changed when an instructor screened a video of a patient undergoing a cardiac catheterization.  “I was mesmerized by what this one guy in scrubs was doing and I kept asking the instructor about it. He said it was a cardiovascular tech. I was like, ‘that’s what I want to do.’”


Cardiovascular technologists work side by side with physicians in performing tests to diagnose and treat patients with cardiovascular disease. The profession comprises three basic areas of expertise: invasive cardiology, noninvasive cardiology, and vascular cardiology. After completing her year-long Telemetry/Electrocardiographic curriculum, White enrolled in the two-year Cardiovascular Technology program. Because she was a credentialed telemetry tech, she worked full time on the weekends, a job that exposed her regularly to what cardiovascular technologists did.


White graduated with an associate degree in 2016 in cardiovascular technology. She embarked on her new career almost immediately, first working in the open-heart operating room at Grossmont Hospital for a year before moving to Paradise Valley Hospital and then the Naval hospital in Balboa Park, where she has been since 2018.


She’s also been a part-time instructor in the telemetry program at Grossmont since 2018.


“I work two jobs, I love them both, and I have them both because of Grossmont College,” White said.

Posted by Grossmont-Cuyamaca Community College District at 7:30 AM