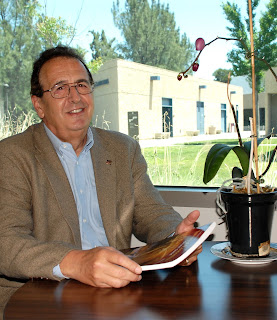 Cuyamaca College economics professor emeritus Anthony Zambelli has been honored by the California Council on Economic Education with its Excellence in Teaching Award, the latest in a string of recognitions Zambelli has earned during his more than four decades as an educator.

The council cited Zambelli’s immeasurable dedication to economic education and innovative leadership through the San Diego Center for Economic Education, which is now based at Cuyamaca College. The Center disseminates programs that promote economic and financial literacy to teachers and students throughout San Diego and Imperial Counties. Under Zambelli’s leadership, the San Diego Center has conducted in-service trainings at Richard J. Donovan Correctional Facility in Otay Mesa to educate prisoners nearing parole on the ins and outs of managing their finances, holds financial literacy workshops for former foster youth, and recently launched the Federal Reserve Institute at the University of San Diego in association with five Federal Reserve Banks.


The San Diego Center for Economic Education at Cuyamaca College, Zambelli said, is the most active center of its kind in California.

“It is an honor to be recognized, but I share this award with the people who are actually making things happen at the Center for Economic Education,” Zambelli said. “I just want to be able to continue giving to the community.”

Zambelli began teaching at Cuyamaca College in the fall of 1979, just one year after the Rancho San Diego campus opened.

Using his legal background, Zambelli helped create the paralegal program at Cuyamaca College. His background in retail management – Zambelli worked at a Merced Gottschalks store while in college – prepared him assist the launch of the retail nursery in the Ornamental Horticulture. program.

Zambelli said his professional path was set at a young age in Merced.

“Economic and financial literacy should be a critical component of public education,” Zambelli said. “Economic literacy teaches us that there is no such thing as a free lunch, that every decision you make has a trade-off and the more informed your decisions are the better off you will be. Personal finance, on the other hand, allows people to know that they can take control of their life no matter where they start.”