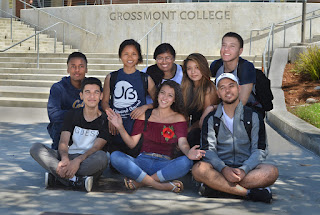 Grossmont College was recognized as No. 52 in the country for the number of associate degrees awarded to minorities in a recent study produced by Diverse, a news magazine dedicated to diversity in higher education.

“This recognition shows that our collective energies toward high, rising and equitable success among all groups, which was recently commended by our accrediting agency, are working for our students,” said Grossmont College President Nabil Abu-Ghazaleh, Ed.D. “Our classified professionals, faculty and administrators have come together to change the way we work inside and outside of the classroom so that all students have the opportunity for success – and our students are rising to the occasion by earning their associate degrees and certificates.”

The data shows that Grossmont College awarded 1,395 degrees to minority students in 2017 - 18, a 30 percent increase over the preceding year. Minority students are those students who self-identified as African American, Asian American, Hispanic, Native American or Two or More Races. For comparison, during the 2017 – 18 academic year, Grossmont College awarded a then-record 4,200-plus degrees to nearly 1,800 students, the most of any community college in San Diego and Imperial counties.

The recognition is yet another distinction for the East County community college, all of which point to Grossmont being the region’s equity college. In November 2019, the college was recognized for the second time in a row by the Aspen Institute College Excellence Program as one of 150 community colleges eligible to compete for the $1 million Aspen Prize for Community College Excellence, the nation’s signature recognition of high achievement and performance among American’s community colleges. Additionally, in October 2019, the college was named a 2019 Champion of Higher Education also for the second year in a row by the Campaign for College Opportunity for its work to significantly increase the number of students earning an Associate Degree for Transfer, an associate’s degree that guarantees transfer to a California State University institution.

About Grossmont College
Grossmont College, a Hispanic-Serving Institution, is “Transforming Lives Through Education” and has served the diverse educational needs of San Diego’s East County since 1961. With more than 150 certificate and associate-degree programs, Grossmont College provides workforce training, career development and transferable college-level coursework to more than 16,000 students each semester. For more information, visit Grossmont.edu.
Posted by Della Elliott at 10:05 AM