Sound of silence not for Grossmont College Guitar Ensemble 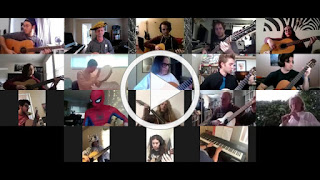 Not to be muted by COVID-19 despite sheltering at home, the Grossmont College Guitar Ensemble put on a virtual performance of a spritely melody, “Renaissance Dance,” in a YouTube video created by Grossmont College music Professor Fred Benedetti.


Guided by a split-screen video of Benedetti performing a six-part harmony, each student recorded themselves playing their instrument -- bass, flute, keyboard, acoustic and electric guitars, tambourine, mandolin and drums. Using software in his home studio, their instructor then extracted the audio, replacing his original audio track with a new track of the students’ performances.


For the video, a Zoom session recorded 17 students, a few of them in costumes, including Spiderman and a tiger hat. Benedetti, who appears in a cameo playing bass and finger cymbals, is wearing whimsical headgear. To overcome sound latency – an inherent problem with Zoom -- the Zoom video then had to be synced with the audio track.


“All in all, it was many hours of work, but the smiles on everyone’s faces and the amazing response was very well worth it,” Benedetti said about the Guitar Ensemble, a performance group of intermediate to advanced music students, which each semester puts on three public concerts.

The pandemic has abolished all live concerts, but Benedetti has his talented students and studio technology to fall back on. A second video "Gankino Horo," a Bulgarian folksong, was recently added.


“We have more to come,” he promised, saying they are shooting for a new video every week.

Posted by Della Elliott at 4:57 PM