Grossmont College math instructor Susan Working was puzzled when she received a call from radio announcers at Channel 933.
Her puzzlement turned to emotion when broadcast personalities Geena the Latina and Frankie V – a popular drive-time pair – informed her on air this week that fellow math instructor Beth Smith had nominated her for the station’s unsung heroes contest.
Geena “The Latina” Aguilar read the words from Smith’s nomination: “I want to nominate my colleague, Susan, as an unsung hero for her dedication to her students and colleagues during the stay-at-home order. Susan is a full-time math instructor at Grossmont College where she has worked tirelessly for the last four months to assist colleagues with the transition to online teaching.
“Even though she was diagnosed with breast cancer in August and is undergoing treatment, she found ways to think ahead about the needs of fellow teachers."
Smith described in her nomination how Working helped fellow faculty structure online lessons and tested students’ responses to determine what approaches and methods worked best.
Smith’s nomination continues: “Susan deserves recognition for her dedication to students and colleagues during the outbreak, all while dealing with her own health challenges.”
Steve Davis, co-chair of the math department, said off-air that Working was quick to identify the department’s technology needs, such as supplemental webcams to take the place of whiteboards for visual demonstrations, and rapidly took steps to help fellow faculty prepare for remote instruction.
“Suffice it to say, without her motivation, organization and commitment, many of our classes, including my own, would likely have been a complete and total disaster in the spring when we went remote,” he said.
Her voice on-air thick with emotion, Working described her academic contributions as “something to focus on” as she battled her illness.
“Our students have so many roadblocks as they come to community college, looking to better themselves,” she said. “Anybody would have done what I did, trust me.”
Working, who is now in remission, said she is doing well, physically, looking forward to her last chemo infusion Oct. 28.
“Not that I am counting, but I am,” she said, laughing.
Aguilar and her radio partner Frankie Vinci responded that Working needed a vacation.
“A lot of people are taking travel vacations – driving places, you know,” Vinci said.
Working agreed, reminiscing about a backpacking trip she had taken for the first time last summer to the Sierras before learning about her cancer.
“You need a good car for that,” Aguilar responded, her voice rising in excitement. “You are getting a brand new Subaru Impreza!” 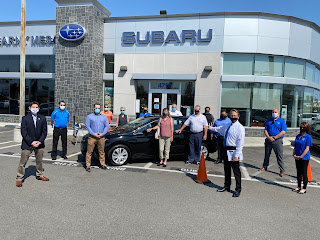 Sunroad’s Auto and Batta Fulkerson Law Group are credited for Working’s windfall on wheels as sponsors of the radio station’s weekly Make Happiness Happen promotion, which over the years has awarded surprise parties, vacations and an assortment of other prizes to deserving nominees. Working’s prize is the first car, the biggest bonanza so far, Aguilar said.
“Oh my God, I’m getting a car,” Working said, incredulously. “Oh my God. Oh my God. Oh my God. Thank you, thank you, thank you!”
Aguilar said the unsung heroes contest drew many entries and as one of the judges, she was moved by Working’s dedication in the face of personal adversity.
“Thank you for what you do for the kids and for having a positive attitude through your sickness,” she told the instructor. “That’s an encouragement for other people who may be going through the same thing. We appreciate you.”
Posted by Della Elliott at 5:12 PM