Grossmont College’s Theatre Arts program is making the best of these pandemic-stricken times by
staging plays that can’t be seen in person, but can still be experienced remotely.
It’s a season unlike any other for the Stagehouse Theatre and the opportunities for innovation, along with free access, have the theatre program hopeful that more people than ever will watch a Grossmont College production.
“We are equal parts excited and nervous because we have been kind of left on our own to figure things out,” said department chair Brian Rickel, explaining that the virtual performances will be free and accessible by links to be posted on the Theatre Arts web page.
With students remaining off-campus, several challenges have cropped up, such as delivering and fitting costumes with no contact between actors and designers, as well as moving sound equipment, costume and scenery shops to the homes of production staff. Despite some initial reservation about the process, Rickel is delighted by the accessibility of the productions, including plans to expand the reach of what would normally be a touring production to local elementary schools. In its digital formal, this fall’s touring production, “Sparkle!,” will be sent to every elementary school in the county, Rickel said.
“Everybody is doing the best they can to adapt to this new world,” he said. “A lot of inventive theater has come from the creative juices of artists writing for a remote audience. The other option in searching for material has been adapting public domain works such as Shakespeare’s ‘The Winter’s Tale' to electronic presentation."
Megan DeBoard, adjunct instructor and director of the season’s opening play, “Hope at the End of the World,” said the play is based on a series of articles written by a colleague, David Herman, and its script will be crafted in consultation with student actors.
“My idea for this show is to set a time and place, and then create a play with the students, written specifically for a Zoom platform, rather than try to make a stage play work on Zoom,” she said. “This is a new world for this type of show. There are no rules, really.”
Except for “The Winter’s Tale,” which will be performed live on Zoom on multiple nights, the October productions will be recorded and posted on opening night for anytime viewing.
Zoom will be used for auditions and three productions for fall 2020:
• Hope at the End of the World: Opening night 7:30 p.m. Saturday, Oct. 3, with link active until Nov. 1 for anytime viewing. A truly collaborative piece of storytelling between the director and cast, “Hope at the End of the World” focuses its themes on events that are surrounding our world right now, along with universal themes of love, growth as an individual and as a community, and finding joy through difficult times. 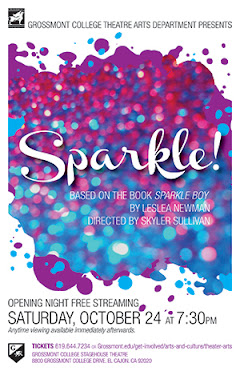 • Sparkle!: Opening night 7:30 p.m. Saturday, Oct. 24, with link active all semester for anytime viewing. Casey loves to play sports, do puzzles, and play with his dump truck, but he also loves clothes that sparkle. In this sweet, heartwarming story about acceptance, tolerance, and the freedom to be yourself, outward expression is celebrated for everyone.
• The Winter’s Tale: performances Thursday-Saturday, Nov. 12-21 at 7:30 p.m., 2 p.m. additional matinees on Saturdays. One of Shakespeare's final plays, “The Winter's Tale” is considered a romantic comedy, but is filled with elements of tragedy and magic. Spanning 16 years and two countries, journey to Italy and Bohemia to experience heartbreak and death, betrayal and grief, young love blossoming in fields, and the most difficult stage direction Shakespeare ever wrote: “Exit, pursued by a bear.” Auditions for the first two productions have already been held. Auditions for “The Winter’s Tale” are 6:30-9:30 p.m Monday, Sept. 21. Anyone cast in a production is required to register in a three-unit production class.