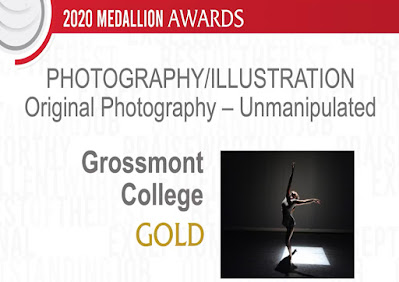 Grossmont College and the Grossmont-Cuyamaca Community College District have won a trio of first-place 2020 Medallion awards from District 6 of the National Council for Marketing & Public Relations.

District 6 includes community colleges in Arizona, California, Hawaii, Nevada, Utah, the Commonwealth of the Northern Mariana Islands, Federated States of Micronesia, Republic of Palau, Republic of the Marshall Islands and the Territory of Guam.

The annual awards recognize outstanding achievement in design and communication by community colleges. This year’s winners were announced during a virtual District 6 awards celebration.

Grossmont College’s Medallion awards were for its 2019-2020 academic catalog and photograph of a dance student. Judges praised the catalog for its clean and simple layout and use of color coding to organize sections of the publication. The dramatic photo of the dancer was described as “beautiful from the lighting to the pose.” Both entries were designed and photographed by Grossmont College’s Creative Services Department. Earlier this year, the 2019 – 2020 academic catalog also received a first place from CCPRO, the professional organization for California community colleges’ public relations professionals.

The college district’s Marketing and Communications office won its gold Medallion in the competitive category of Annual Report. Judges praised the 2018-19 Report to the Community for its design and theme of goals met, highlighted throughout with an illustrated stamp with the word, “Fulfilled,” in red.

The National Council for Marketing & Public Relations is the only organization of its kind that exclusively represents marketing and public relations professionals at community and technical colleges. NCMPR has more than 1,700 members from nearly 650 colleges across the United States and Canada.