Trustee Bill Garrett lauded at his final board meeting

As Tuesday night’s board meeting drew to a close, so did a chapter in college district history with the retirement of Bill Garrett, a beloved and esteemed member of the Grossmont-Cuyamaca Community College District Governing Board for more than 16 years.

Noted for his unwavering commitment to the college district and especially its students, Garrett was thanked by fellow trustees and colleagues at his final meeting held virtually because of the pandemic. He was applauded for his steady leadership as board president between 2008 and 2018 and the example he set for respect and civil discourse.

“Twenty-five years ago, when I came to El Cajon, I was asked the question why I chose to come to El Cajon and I said it was because it has two community colleges,” Garrett said. “Community colleges are what I consider to be the finest things that the state of California has. When I had the opportunity to be board president, it was a priority for me to emphasize the importance of civility in particular. We may have disagreements, but we don’t have to be disagreeable. It has been great to have this opportunity to serve and I think so highly of all the works that’s been done at Grossmont and Cuyamaca.”

A video tribute by 16 past and current district employees, students and a leading representative of the business community lauded his long service, as well as his early years as a volunteer and contributor to the colleges’ foundations.

Garrett who earlier this year announced his decision not to seek re-election, will be succeeded by Julie Schorr, a Granite Hills High School French teacher, who was elected to the board on Nov. 3. Incumbent board member Elena Adams was elected to a second term. 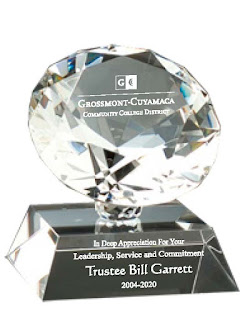 Garrett, an El Cajon city manager from 1996-2004, also received a proclamation Tuesday from state Sen. Brian Jones, as well as a commendation from the City of El Cajon.

“He has been a force in the community, a force at the college and a force at the state, advocating statewide, as well as nationally, for issues important to community colleges for our students and for our community,” said Lynn Neault, chancellor of the Grossmont-Cuyamaca Community College District. “You are loved and respected by many.”

“The arc of his life has been completely committed to public service,” she said.

During his time on the college district board, Garrett helped lead the passage of Proposition R, a $207 million bond measure approved by voters in 2002, which resulted in the construction or renovation of 16 projects on the campuses of Grossmont and Cuyamaca colleges. Proposition V, a $398 million bond measure approved in 2012, is being used to construct facilities including a new Performing and Visual Arts Center at Grossmont College and a Student Services Center at Cuyamaca College.

He became involved with the college district soon after moving to the area in 1996, serving on the Cuyamaca College Foundation for eight years, including five years as president. He also served on the Citizens Bond Oversight Committee, which oversaw bond construction spending, until he was appointed to the Governing Board.

Current Governing Board President Linda Cartwright said the district is a stronger institution because of Garrett’s contributions.

Garrett and his wife, Judy, a former president of the Foundation for Grossmont & Cuyamaca Colleges, funded two scholarships continuing in perpetuity, one at each college. The Garretts, both theater lovers, have also extensively supported the Theatre Arts Department at Grossmont College. In recognition of the Garretts’ considerable contributions, the district created an annual award, the Bill and Judy Garrett Civic Leadership Award, and named them as the first recipients in 2017.

Jo Marie Diamond, CEO of the East County Economic Development Council, praised Garrett for his engagement with the community.

“What I admire most is his commitment and involvement with the greater East County community, its economy, its people, its students, its faculty and its culture,” she said. “That commitment made it clear he always understood how important it is for the college district and the colleges to be the anchor institutions they are meant to be.”

A pet project of Garrett’s was the mentorship of governing board student trustees, as noted by former student representative Zack Gianino and current Grossmont College student trustee Benjamin Blevins.

“I want you to be aware you have had a really large impact on students districtwide,” Blevins said.