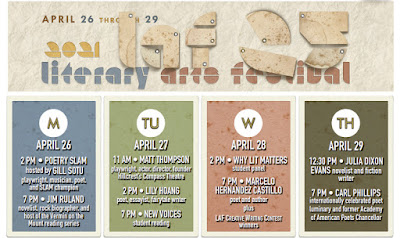 The Grossmont College Literary Arts Festival has special reasons to celebrate its April 26-29 run: its 25th anniversary and its return after a one-year COVID hiatus.

Although its comeback will be virtual in keeping with health protocols, the spirit and intent of the weeklong festival put on by the English Department’s Creative Writing program remain the same: to highlight poetry, memoirs, literature, and student writings, and to provide an opportunity to hear writers across the country talk about their inspirations and challenges filling blank pages.

The festival is free and open to the public. Writer bios, workshop descriptions and registration links are available at https://tinyurl.com/3akfaxnb

"We are delighted to be able to bring back our Literary Arts Festival,” said Adam Deutsch, festival and Creative Writing program co-coordinator.” This event offers opportunities for the public to engage with living authors and literature in ways rarely possible at community colleges, and for student authors to share their creativity with a wide audience.”

The 25th Anniversary Literary Arts Festival kicks off with the 6th Annual Student SLAM competition. Open to all Grossmont College students, poets battle for the title of Grand SLAM champion of Grossmont College. Limited to 12 participants, the top six are selected to advance to Round Two, from which a champion is named.

Novelist, rock memoirist, punk rock blogger, and host of the Vermin on the Mount reading series, Jim Ruland returns to the Literary Arts Festival to read from his newly released work, “Do What You Want” (Hachette Books 2020), the first official autobiography of the groundbreaking L.A. punk group, Bad Religion.

Stage actor, director, playwright, and lecturer Matthew Salazar-Thompson has authored dozens of plays during this career, with commissions including The San Diego Repertory Theatre, North Coast Repertory Theatre, Point Loma Playhouse, Coronado Playhouse, and many others. “The 146 Point Flame,” based on the historic 1911 Triangle Shirtwaist Factory fire, has been described in Southern Theatre Magazine as one of the top 10 plays on immigration.

Lily Hoang is the author of five books of prose, including “A Bestiary,” 2016 winner of the Cleveland State University Poetry Center’s Non-Fiction Book Prize. In 2017, she was Mellon Scholar in Residence at Rhodes University in South Africa.

Hosted by Professors Lisa Ledri-Aguilar and Sarah Martin, this features a panel of Grossmont College students sharing moving and powerful personal accounts of the role literature has played in their journeys.

Marcelo Hernandez Castillo is the author of the chapbook “Dulce” (BOA editions 2018), and the collection “Cenzontle” (2018), winner of the 2017 A. Poulin Jr. prize. A recipient of the Barnes and Noble Writers for Writers award, Castillo was the first undocumented student to graduate from the Helen Zell Writers Program at the University of Michigan.

Winner of the 2019 Magazine Award for Fiction, fiction writer Julia Dixon Evans reads from her debut novel, “How to Set Yourself on Fire” (Dzanc Books, 2018). As a journalist, Evans has penned the culture report for Voice of San Diego and currently covers the local arts and culture scene for KPBS.

Queer African American author, poet luminary, and former chancellor of the Academy of American Poets, Carl Phillips will read from his latest poetry collection, “Pale Colors in a Tall Field” (Farrar, Straus and Giroux 2020). Widely esteemed as one of the most influential lyric poets in the United States, Phillips has authored 15 internationally acclaimed books of poetry. A four-time finalist for the National Book Award, and finalist for the National Book Critics Circle Award, Phillips’ honors include the Lambda Literary Award, an Award in Literature from the American Academy of Arts and Letters, the Theodore Roethke Memorial Foundation Poetry Award, the Thom Gunn Award for Gay Male Poetry, and fellowships from the Guggenheim Foundation, the Library of Congress, and the Academy of American Poets.

Posted by Della Elliott at 1:24 PM