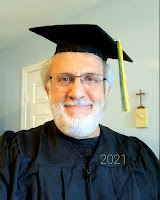 For Caesar Mazahreh, June 9, 2021 was a milestone: celebrating his 60th birthday and ceremonial tassel turn on the same day as Grossmont College’s 60th commencement.

“I informed my daughter of the coincidence and she said, ‘Dad, you are as old as Grossmont College,’” said Mazahreh, who earned associate degrees in Business Administration, Economics and a certificate of achievement in University Studies with a 3.6 grade point average.

Mazahreh first came to Grossmont College 41 years ago right after graduating from high school in Jordan. He lived with his brother, who was attending San Diego State University. After earning his bachelor’s degree in electrical engineering, Mazahreh’s brother returned to his home country.

Alone and struggling academically his first time at Grossmont College, the young Mazahreh lost his financial aid and ended up dropping out, working odd jobs to get by.

Office Professional Training, the free, one-semester program at Grossmont College that has produced more than 2,600 well-prepared office workers and placed some 85 percent into jobs over the past 35 years, is gearing up for its fall 2021 term.

“OPT is truly an amazing program,” said Candy McLaughlin, the Business Office Technology lab specialist who assists with OPT. “We pay for tuition and lend textbooks to students. We also have a career placement specialist and a licensed counselor who are solely dedicated to OPT. There is so much support for students.” 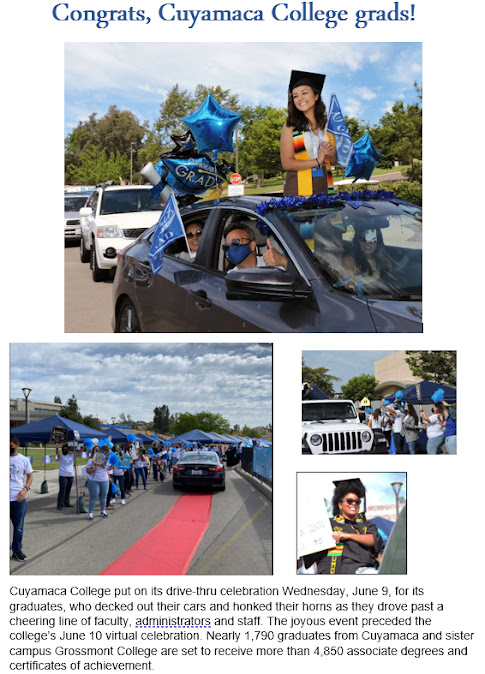 Posted by Della Elliott at 5:07 PM No comments: 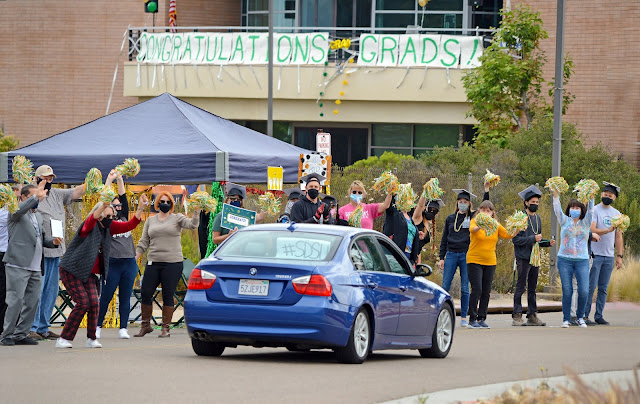 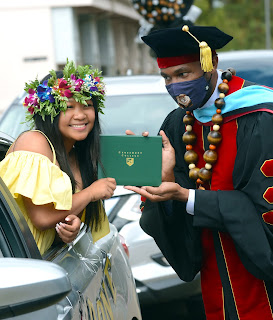 Grossmont College grads celebrated June 8, 2021, with a drive-thru procession one day before their virtual commencement ceremony. 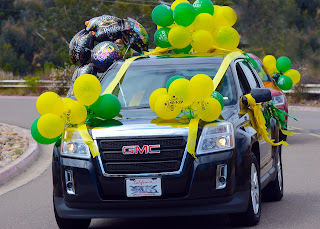 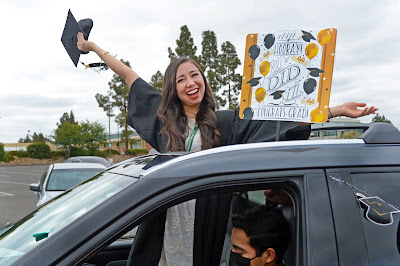 The in-car event gave students an opportunity to show up in their regalia, decorate their cars and be greeted by faculty, administrators and staff lining the college's perimeter road.

Nearly 1,790 graduates from the two colleges are set to receive more than 4,850 associate degrees and certificates of achievement.

Posted by Della Elliott at 4:11 PM No comments:

Celebrations to honor about 1,800 graduates

The graduating classes of 2021 at Grossmont and Cuyamaca colleges are holding their commencements virtually, with drive-thru processions the day before for more jovial -- but still safe – celebrations.

Almost 1,790 graduates from the two colleges will receive 4,854 degrees and certificates in virtual ceremonies to be held 5 p.m. Wednesday, June 9, for Grossmont College and 5:30 p.m. Thursday, June 10 for Cuyamaca College.

Digital presentations of electronic slides featuring the accomplishments of individual graduates will take the place of the traditional processional. Because of COVID-19 safety protocols, the colleges opted for online commencements to protect the health and safety of the community. The drive-thru events give the graduates an opportunity to dress in their regalia, decorate their cars, have photos taken and be congratulated by faculty and staff along the route.

Read more »
Posted by Della Elliott at 11:17 AM No comments: 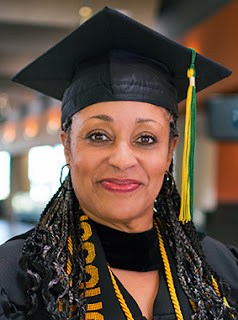 Melissa Shields is proof that all things are possible for those who believe in themselves, especially when they work hard and get the support they need to succeed.

At age 53, the Grossmont College student commencement speaker is a first-generation, African American college graduate. But she didn’t always have the confidence in her academic abilities as she does today. As a young adult, Shields believed that she was unintelligent. After her parents’ divorce, she dropped out of high school at 18. Then, life happened, and she became a wife and  mom. As her children grew up, she realized that she had a limited ability to assist them with their homework. She was also embarrassed and ashamed to tell her children that she had not graduated high school.

Read more »
Posted by Della Elliott at 1:15 PM No comments: 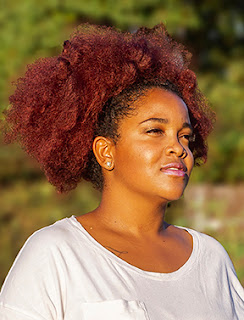 Shanae James-May is a Communications and Behavioral Science major at Cuyamaca College, where she has been selected as the commencement speaker for the June 10 virtual ceremony. She is transferring to San Diego State University to purse a degree in Urban Planning and Development.
Like many college students, in her five years at Cuyamaca College Shanae juggled a full-time job, a family with small children, school, and community volunteer work. She took a break from school, but persisted after finding a better way to organize her responsibilities, and with the support of her husband and family.
Read more »
Posted by Della Elliott at 1:14 PM No comments: