The students in Michael Grant's media communications class at Grossmont College put together this incredibly powerful video. Take a few minutes to watch and see the state budget crisis from the students' point of view.
Posted by Grossmont-Cuyamaca Community College District at 8:14 AM

Green Business Symposium May 26 at Cuyamaca

Local jobs experts and business leaders will gather Thursday, May 26, at the Cuyamaca College Performing Arts Theater for a green business symposium to identify growth opportunities and ways to create new jobs in the region’s fledging green industry.
The symposium, which is free and open to the public, is presented by the San Diego Green Workforce Coalition, a partnership of the Grossmont-Cuyamaca Community College District, the San Diego Workforce Partnership and the California Center for Sustainable Energy. The symposium will be held from 8 a.m. to 12:30 p.m., and registration begins at 7:30 a.m. at the college, 900 Rancho San Diego Parkway, in Rancho San Diego. Online registration is also available at www.cuyamaca.edu/green.
Read more »
Posted by Grossmont-Cuyamaca Community College District at 2:38 PM 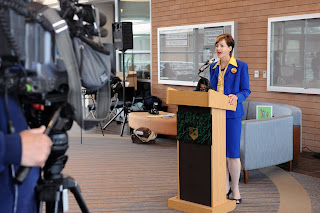 Community college leaders in San Diego and Imperial counties say that tax extensions proposed by Gov. Jerry Brown are necessary to avoid an “educational Armageddon” that would result in more than 3,300 courses being cut and 46,000 students who would be turned away from the classes they need.

Administrators with the six community college districts and students who spoke at a news conference at Grossmont College on Tuesday urged legislators and California voters to support funding for the system that serves more than 2.7 million students statewide and about 300,000 in San Diego and Imperial counties.

Constance M. Carroll, chancellor of the San Diego Community College District, said state funding to the districts has been cut by $73 million in the past two years.

“All of the six districts that are represented here have taken the same massive cuts,” Carroll said. “What’s difficult about the choices that have had to be made is that this is occurring at a time when California has had its largest graduating class in history and when the unemployment rate in San Diego County is at 10.1 percent and 30 percent in Imperial County.”

Brown’s revised budget issued Monday restored some funding to the state’s community colleges due to larger than expected tax revenues of $6.6 billion and a $10 per unit increase in student fees. However, the educators said the tax extensions that Brown wants voters to approve are critical because the additional revenues aren’t sufficient to close a state budget deficit estimated at $9 billion.

Without the tax extensions, the colleges potentially face even deeper budget cuts, doubling the amount of funding they could lose.

Cindy L. Miles, chancellor of the Grossmont-Cuyamaca Community College District, said further funding cuts would devastate the East County campuses already hard hit by a $15 million reduction in the past two years. The district stands to lose another $8.1 million this year while struggling to meet the highest demands in the history of its two colleges, Grossmont College in El Cajon and Cuyamaca College in Rancho San Diego.

The Grossmont Master Chorale is performing a concert called "Songs of Love" at 7:30 p.m. Saturday, May 14, at St. Martin of Tours Catholic Church at 7710 El Cajon Blvd. in La Mesa. Admission is free.


A second performance will take place in the beautifully wooded sanctuary of All Saints Episcopal Church of San Diego on May 24 at 7:30 p.m.
Each performance features the chorale as well as small ensembles and soloists from within the chorale.  Guest musicians Michael Gaby, oboist; and Samantha Goldstein, reciter; join GMC soprano soloist, Audra Nagby in a special performance of Margaret Griebling-Haigh’s Songs for Young Lovers.  Sung in German, the musical centerpiece of the concert features a performance of Brahms beloved Liebeslieder Wältzer, op. 52, as accompanied by staff pianists Robert MacLeod and Katherine Petrosyan. Additional repertoire includes: di Lasso’s Mon coeur de recommende à vous, Gregg Smith’s My Heart Is Longing for Your Love, Corigliano’s Liebeslied, McGlynn’s When I Was in My Prime, and Sir Edward Elgar’s False Love, op. 27 No. 2.

Dr. Mark J. Zacovic, now serving as executive vice president of instruction and student services at Victor Valley Community College, has been named president of Cuyamaca College effective July 1.
Cindy L. Miles, chancellor of the Grossmont-Cuyamaca Community College District, said Zacovic’s energy and passion for educating students became clear during an extensive recruiting process.
“He brings a deep background and understanding of California community colleges that will serve Cuyamaca well during this time of financial hardship brought on  by the state’s worst-ever budget crisis,” Miles said. “Dr. Zacovic’s breadth and depth of college leadership experience includes colleges of every size, both single-college and multi-college districts, and urban as well as rural districts.