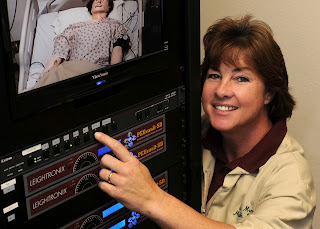 Pat Murray, a familiar face at Grossmont College whose volunteer spirit is practically legendary, has been Classified Employee of the Year for the state community college system.
“I guess I have something to show my husband now for all the hours I spend on projects around here,” the health science lab tech said about being selected as one of five employees statewide to receive the top award recognizing non-teaching workers in California’s  72 community college districts, including Grossmont-Cuyamaca.


Recipients are nominated by their colleagues and endorsed by their local Board of Trustees. Winners are selected by representatives of the Board of Governors for California Community Colleges, the Chancellor’s Office, and the Foundation for California Community Colleges, based on their professional contributions and their record of participation in activities on and off campus.
A $500 cash award and plaque will be presented to each recipient at the May 8 meeting of the Board of Governors in Sacramento.  Joining Murray at the awards presentation will be fellow winners Doris Brinkley-Hankins, Peralta Community College District; Kim Christiana, Contra Costa Community College District; Scott Ludwig, West Valley-Mission Community College District; and John Welch, Cabrillo Community College District.
Also garnering recognition at Tuesday’s Sacramento meeting will be Cuyamaca College, one of three recipients of the community colleges’ Board of Governor’s Energy and Sustainability Award highlighting exemplary energy and sustainability efforts by college districts.
Murray’s selection for the award from the ranks of the nearly 30,000 community college classified employees in the state comes as no surprise to anyone who has associated with her at the college district. The nomination prepared by Debbie Yaddow,  nursing professor and dean of Allied Health and Nursing at Grossmont College, includes a long list of accomplishments and ways her volunteerism have benefitted the college and outside communities.
The 13-year Grossmont College employee is a member of the Classified Senate, chair of the Kudos Award program for outstanding staff, and has assisted in coordinating the Students of Note awards program recognizing students who have overcome obstacles to succeed in college. Murray helped the Classified Senate raise money for a major, perpetual student scholarship fund and has assisted with the college foundation’s gala fundraiser.
“Pat is a leader who is always looking for ways to help students, promote a positive working environment for her colleagues, and advance this district’s standard of excellence,” said Cindy L. Miles, district chancellor. “We are very proud of her and deeply appreciate her invaluable efforts.”
Murray also volunteers with a local Catholic high school and is the adult leader for a youth group that organizes charitable activities.
Murray was hired as a nursing department secretary in 1999, and immediately began developing ways to use technology to streamline paperwork. When she transferred in 2002 as a student services specialist in the Extended Opportunities Programs and Services office, she quickly gained the confidence of students facing language, social or economic disadvantages.
For an annual holiday party for single parents, Murray got the entire campus involved in donating gifts. She brought in students from the Administration of Justice program to fingerprint children and recruited the district public safety officers to talk about safety.
In 2007, when she began working in her current position as a Health Science Lab technician, Murray ordered lab coats to make the techs more identifiable to students, as well as to boost security in the lab with its costly, high-tech equipment.
As a self-confessed computer geek, Murray is in her realm in the lab’s control booth. With a series of commands from a computer keyboard, she brings life to the collection of human patient simulators that students and nurses from area hospitals use to practice their nursing skills. In a setting that could be daunting to those less technology-prone, Murray is a reassuring voice, coaching both students and faculty.
Murray, a mother of two, has come a long way from her days as a rebellious teenager who shunned college. She later became a community college graduate and began taking courses at San Diego State University. She plans to return to finish her degree.
Murray waxes philosophic when asked how she manages to find the time. She describes herself as “sorta organized” and laughs when her lab partner paints a picture of her “always grinding away” at one task or another. When she is interrupted by a phone call reminding her of a missed meeting with her church youth group, she readily concedes that there are occasions when her calendar gets the best of her.
“I am always trying,” she said. “The more things I am involved in, the higher the chance I might not succeed. So I feel that as long as I am making mistakes, I am trying. It’s when things never go wrong that I should start to worry.”
Posted by Grossmont-Cuyamaca Community College District at 10:44 AM