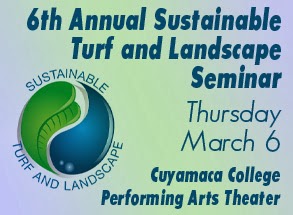 
David Phipps, a field representative of the Golf Course Superintendents Association who’s appeared on the Golf Channel, tops a list of presenters focusing on sustainability in golf course and turf maintenance


Cuyamaca College, renowned for its longtime commitment to the green movement, began hosting the seminars as a forum for educators, industry representatives and local organizations interested in fostering a culture of sustainability. The event is put on by the college’s Ornamental Horticulture program.


“This year we are excited to focus on the turf industry and how it is adapting to the changes underfoot for more sustainable landscape practices,” program coordinator Don Schultz said, noting sustainability initiatives by golf courses such as reducing storm water pollution and establishing wildlife habitats.  “Our top-notch speaker lineup is sure to be a big draw to the golf course, sports turf and the landscape industry.”

Read more »
Posted by Grossmont-Cuyamaca Community College District at 9:03 AM

Nearly 100 local artists, including Grossmont College art faculty, have donated their own artwork to “100 x 100 – Artists for Healing,” a benefit to raise money for the American Cancer Society that takes place from 7 – 9 p.m., March 14, in Hyde Art Gallery.

Event attendees will be able to select a piece of art to take home after donating $100 prior to or at the event. Cash or check donations will be accepted at the event, as is proof of an online American Cancer Society donation made prior to the event.

Read more »
Posted by Grossmont-Cuyamaca Community College District at 10:53 AM


The BACK TO WORK 50+ initiative was launched as a pilot program in 2013 in Denver, Colo., and AARP Foundation expanded the program in January with a new partnership with the American Association of Community Colleges. A dozen colleges and college districts across the nation were selected as the first to participate in the expanded program, with the Grossmont-Cuyamaca Community College District as the only one in California. Three more colleges will join the network later this year.


With support from the Walmart Foundation, AARP Foundation has committed $2 million to BACK TO WORK50+ which has so far provided 2,000 people with resources and information to find good jobs in their communities.


As an African-American college dean, Marsha Gable knew she was taking a risk focusing on the touchy topic of race in her doctoral dissertation in 2011.
But what resulted is a fascinating, intensely personal account of seven black women who managed to beat the odds to become CEOs in the state systems of public colleges and universities. The Cuyamaca College dean of counseling services since early 2013 gave a recent presentation, “Our Roots are Deep: Living Life from the Core,” as part of the campus’ commemoration of Black History Month.


Gable, who received a doctorate in education from San Diego State University, reached out to all 28 college leaders to participate in her study. She calls the group who participated the “Seven Wise Women,” who each agreed to interviews, field observations and journals chronicling their day-to-day activities.

Read more »
Posted by Grossmont-Cuyamaca Community College District at 11:51 AM

A contingent from the Grossmont-Cuyamaca Community College District recently visited Washington, D.C. to participate in the ACCT National Legislative Summit and advocate with their federal legislators for support of community colleges. 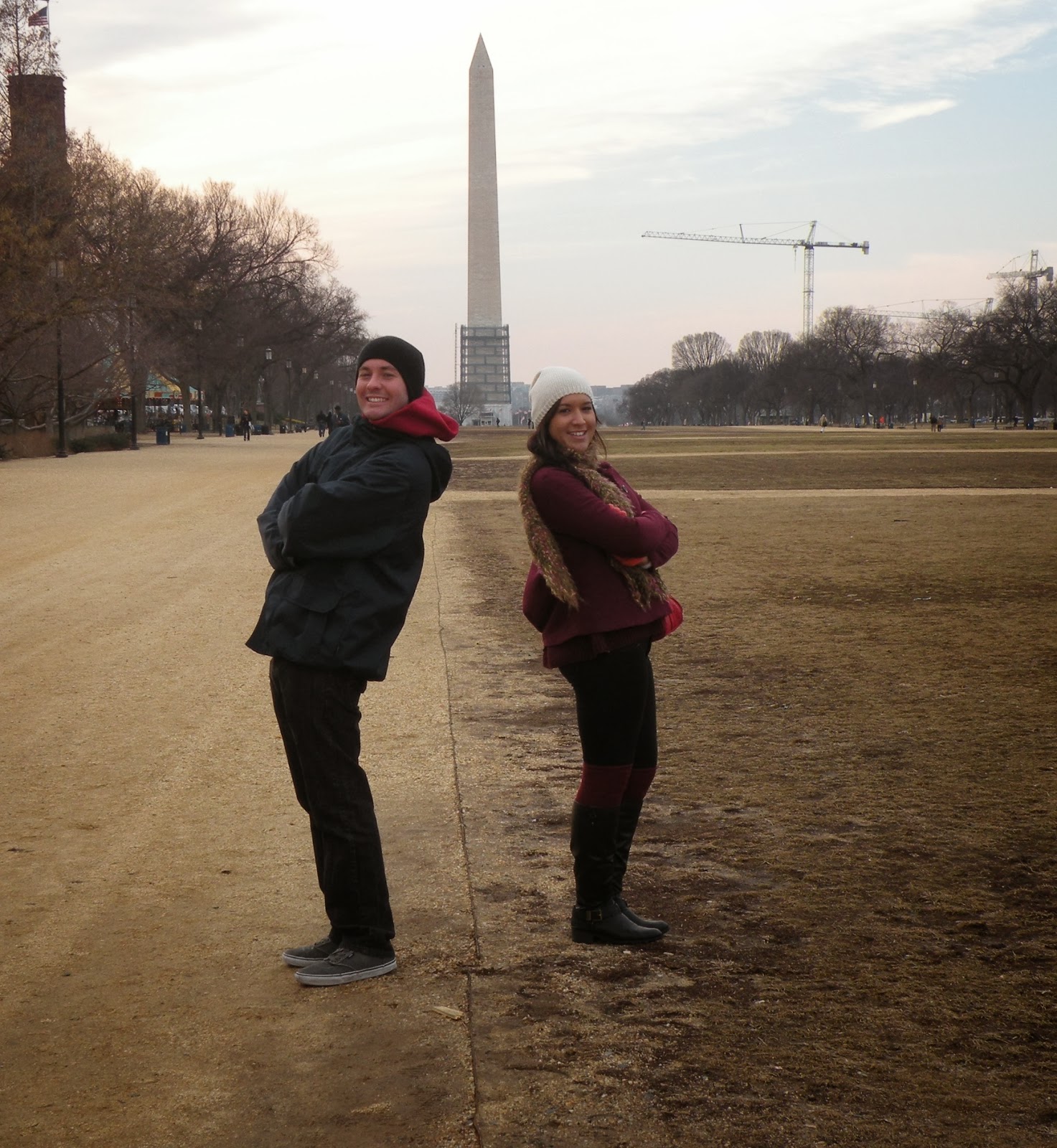 It was Zack and Elsa's first trip to Washington, in a trip that was made more memorable when a foot of snow fell on Washington and crippled the city.

They had a chance to spend a few hours touring the U.S. Capitol and exploring some of the museums on the Mall.

Here are some photos from the trip.

The Foundation for Grossmont & Cuyamaca Colleges has its own take on the three R’s  -- “Revisit, Reconnect, Rejuvenate.”


That is the slogan of the 2nd Annual Homecoming Event for Retirees, a Feb. 20 get-together for former employees of the colleges and district, a resource of about 400 potential volunteers that the foundation would like to tap for a host of college events and programs.

Set for 2-6 p.m. at Grossmont College’s Griffin Gate, the event is free to retirees and guests, and includes faculty presentations, tours of the high-tech facilities funded by the 2002 Prop. R construction bond measure, a wine and hors d’oeuvres mixer, and an update by the foundation on upcoming retiree events.

Read more »
Posted by Grossmont-Cuyamaca Community College District at 8:30 AM

GCC founder and president Denise Reading said the customized training offered by the network of community colleges provides the flexibility to quickly and efficiently conform to market demands.

Grossmont and Cuyamaca colleges received the welcome word today that they earned the highest level of endorsement by the Accrediting Commission for Community and Junior Colleges.


The accrediting committee’s seal of approval - formally referred to as a six-year “reaffirmation of accreditation” – was issued following its biannual meeting in January to consider accreditation applications.


Separate evaluation teams visited both colleges for a week last October to prepare their recommendations to the commission. Grossmont College’s team complimented the college for the transformative changes that had occurred since the last accreditation in 2007. Cuyamaca College was praised for its student-centered focus and its high level of student engagement in governance and the decision-making process.

It’s a record that short-track speedster Apolo Ohno would envy.


OK, so it isn’t the Sochi Olympics. But a decade run of spotless audits has Grossmont-Cuyamaca Community College District officials ready for a victory cartwheel, the signature move of alpine skier Tina Maze.


The five separate audits presented last week to the Governing Board cover the district’s general audit; its part-time employees’ pension plan; the Foundation for Grossmont and Cuyamaca Colleges, the district’s auxiliary, and Proposition R, the construction bond fund approved by East County voters in 2002.


The district’s stretch of what’s known in the accounting lexicon as unmodified, or flawless, audits is quite an accomplishment, said Chancellor Cindy Miles.


“With the banking debacles of recent years changing auditing standards and requirements, auditors are that much more detailed and thorough in their reviews,” Miles said. “So to be able to retain a spotless record is a testament to the district’s fiscal acuity.”

Read more »
Posted by Grossmont-Cuyamaca Community College District at 9:35 AM

To honor the movements, traditions and legacies of peoples of the African diaspora, Grossmont College will host a variety of educational and entertainment events throughout February as part of Black History Month.


·         Award-winning poet, playwright and author reg e gaines will read from his selected works at 7 p.m., Tuesday, Feb. 11, in Griffin Gate; this event immediately precedes a screening of the documentary, “The Night James Brown Saved Boston”


·         SACRA/PROFANA, dubbed “San Diego’s Go-To Chorale Ensemble” by the Union-Tribune in 2012, will perform “Dream Variations,” based on the works of Langston Hughes, at 6 p.m., Friday, Feb. 28, in Griffin Center; Grossmont College’s Gospel Choir, directed by Ken Anderson, will also perform with SACRA/PROFANA


All events are free and open to the public. To find a complete listing of Black History Month events, visit Grossmont.edu. For additional information, contact Student Affairs at 619-644-7600.


Posted by Grossmont-Cuyamaca Community College District at 9:10 AM

Diversity awareness continues to be a goal at Cuyamaca College, where Black History Month includes a forum on African-American women leaders, and the return of the semester-long workshop series, Diversity Dialogues.


Marsha Gable, dean of counseling services at Cuyamaca, will present “Our Roots are Deep: Living Life from the Core,” a Tuesday, Feb. 11, symposium exploring black women leaders’ paths to career and personal success.


“Driven by the values of relationships, family, spirituality and equality, African-American women are poised to succeed and enjoy life from the core,” Gable states in a publicity flier for the workshop set for 11:30 a.m.-12:30 p.m. in room I-207 in the student center.


Also a part of Black History Month, a display marking the 50th anniversary of the Civil Rights Act of 1964 is set up on the first and second floors of the campus library. Cuyamaca’s observance of  African-American history continues with a lively step-show performance Tuesday, Feb. 25,  by the San Diego State University chapter of the predominantly black Phi  Beta Sigma fraternity.  The 2 p.m. dance performance will be at the student center quad.
Read more »
Posted by Grossmont-Cuyamaca Community College District at 9:08 AM