Grossmont College Theatre Arts Department veteran Jerry Hager is staging a special performance of his one-man show, “Invisible,” on Oct. 16 & 17 to raise money for the college’s Summer Conservatory for high school and college students interested in exploring the theatre. 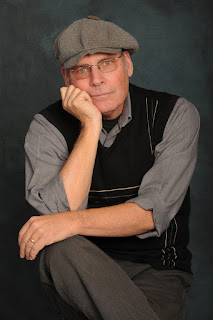 “Invisible” explores the stories of those living on the street. The play features 10 characters, including an old woman, a teenager, a brash woman, a veteran, a man suffering from cerebral palsy and characters with extreme personalities.Nine of the characters wear masks created by David Knezz,a critically acclaimed mask maker from Chicago.


“The idea is to unmask the characters in the performance and illustrate that we’re all people just trying to do the best we can,” Hager said.


All proceeds will go to the Grossmont College Summer Conservatory, an eight-week course where high school students work side-by-side with their college counterparts learning set and costume construction to acting and choreography. The Summer Conservatory recently wrapped up its second season with sold-out performances of “Cinderella - A New Pop Musical.”

Next year’s Summer Conservatory will culminate with a musical production of “Around the World in 80 Days.”


All of the students – high school and college, actors and stagehands – earn college credit for their participation in the Summer Conservatory.


“Invisible” was inspired by a journey experienced by his daughter, a young actress who lives in Los Angeles. Hager’s daughter had lost her car keys in Hollywood, and when she retraced her steps to a phone booth, she met a homeless man who said he saw someone take them and suggested she follow him to find the person. Her journey brought her into contact with a number of different people who were living on the street.


“She was totally blown away by the fact that this man who didn’t even know her went out of his way to help her, and after he found the keys, walked her back to her car to make sure she would be safe,” Hagar said. 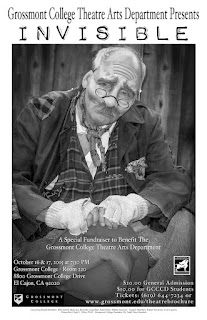 While some of the details have been changed for the play, the message remains the same: the homeless can be just as caring, helpful, and human as anybody else.


Hager is a Professor of Theatre Arts at Grossmont College, where he has worked for the past quarter century. He also has collaborated with several San Diego arts organizations, including the San Diego Symphony and Classics For Kids. Hager has been with Young Audiences of San Diego for the last 30 years serving as both a Master Teaching and Performing Artist as well as assisting with myriad special projects for Young Audiences.


“Invisible” premiered last year at The Vine Theatre in Rancho Bernardo and was staged again earlier this year at the Joan B. Kroc Theatre in San Diego.


“Invisible” will be performed at the Grossmont College Recital Hall (Building 26, Room 220), at 7:30 p.m. on both Oct. 16 and 17. General admission seats are $20. Grossmont and Cuyamaca College students with proper identification will be charged $10. Tickets can be purchased at the Grossmont College Stagehouse Theatre Box Office, and at the door one hour before show time. Further information can be obtained by calling the Stagehouse Box Office at (619) 644-7234 or by visiting www.grossmont.edu/theatrebrochure .