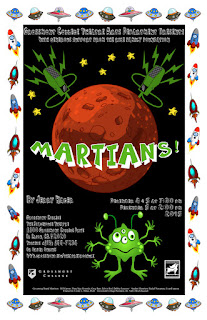 Schools receive a free copy of “Aliens Are Coming!” by Meghan McCarthy for their campus library. The children’s book is a hilarious but true account of Welles’ 1938 War of the Worlds radio broadcast.

The Fall Elementary School Tour is sponsored by the Rice Family Foundation. More than 100,000 students have been treated to performances since the program began.

The Fall Elementary School Tour is but one in a series of outreach educational programs staged by the Grossmont College Theatre Arts Department. Other events include the annual DramaFest & TechFest, a daylong series of acting and behind-the-scene technical workshops co-sponsored by the San Diego Educational Theatre Association for more than 1,000 high school students. “Inside the Actor’s Process” aims to teach teens the finer points of stage performance and visits more than a dozen high school campuses throughout the county. And the annual Summer Conservatory is an eight-week course where high school students work side-by-side with their Grossmont College counterparts learning set and costume construction to acting and choreography.

The Fall Elementary School Tour will stage 23 performances this fall, including shows at the St. Vincent De Paul School and the Polinsky Childrens Center in San Diego.

Those who want to see the Dec. 4 and 5 performances of “Martians!” at Grossmont College can buy $10 general admission tickets at the Grossmont College Stagehouse Theatre. Tickets can also be purchased online or by calling the Stagehouse Box Office at 619-644-7234.
Posted by Della Elliott at 8:12 AM