Open to the public, the sixth annual music fest is put on by students in the Music Industry Studies program as a term project to learn the intricacies of concert promotion and production. Admission is $5 or a donation of three canned goods to the San Diego Food Bank. Ample free parking will be available at the college at 900 Rancho San Diego Parkway in Rancho San Diego. 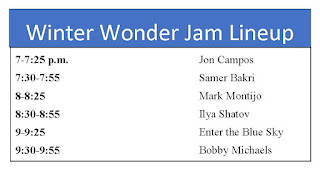 The event will showcase six bands and artists performing original music, along with their version of a Christmas song. Representing a variety of genres from singer songwriter, folk, Americana, and rock, the local talent will be playing in one of the most acoustically sound venues in East County.

The holiday bash is an all-ages event with pastries and beverages, along with tables set up for musicians to sell CDs and T-shirts.


The entirely student-produced event is designed to teach students what it takes to put on a large-scale production, said co-instructor Annie Zuckerman. The students handle every aspect of the concert from auditioning bands, developing a marketing plan, creating posters and fliers, promoting the concert via social media, setting up the event, managing the stage transitions from one band to the next, and running the live sound – all under the tutelage of the faculty and staff from the Performing Arts Department.


Music Industry Studies is a transfer degree program unique locally to Cuyamaca College that combines classes in music theory, literature, and performance with studies in music technology and business. The festival is the product of one of the program’s classes, the Music Industry Seminar.


The class is broken up into teams, with each group assigned a specific task. The seminar class has so much to offer that students take it for four semesters, each time learning a new skill. During the spring, the students put on the Coyote Music Festival, an even larger outdoor event. And it isn’t just music students, but graphic design, art and business students who are recruited to take the class. Zuckerman leads the seminar along with music instructor ­­­­­­­­­­­Taylor Smith.


For more information, including links to bands performing at the festival, go to www.facebook.com/winterwonderjam. For further information about the Music Industry Studies program, go to www.cuyamaca.edu/performingarts/programs.asp#music or call (619) 660-4322.


For more information about Cuyamaca and Grossmont colleges, go to www.gcccd.edu

Posted by Della Elliott at 3:56 PM