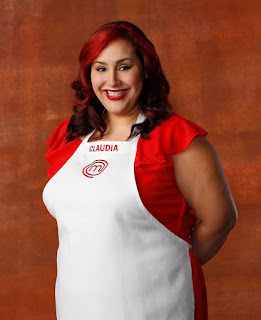 Claudia Sandoval has never been afraid to step outside of her comfort zone. When most of her friends at Sweetwater High School were heading to Southwestern College after graduation, she opted for Grossmont College. And when the accomplished cook whips up a traditional Mexican dish, she’s not afraid to experiment with the ingredients.


That trait helped the Grossmont College graduate (Class of 2010) claim the title to the recent “MasterChef” Season 6 competition.


“I’ve been a fan of the show since its inception,” Sandoval said. “It takes the average person who likes to cook at home and transforms them into a master chef. It’s the epitome of the American dream.”


Sandoval, who lives in La Mesa, said a friend urged her to audition for the cooking competition in 2014 upon hearing a September audition would be held in San Diego. After some hesitation, Sandoval completed an application and was later invited to take part in the audition.


“My boss was supportive, my friends were supportive, so I went for it,” said Sandoval, who was working as an event manager at a local public relations and marketing agency. “Everyone was telling me how it could change my life.”


Her life changed when she cooked up a three-cheese tortellini, “something I could make with my eyes closed.”


While she waited to hear back from producers at the hit Fox network show, Sandoval experimented with dishes beyond her Mexican food roots. Sandoval got the call that December. She had landed one of 22 spots on the show and would spend the next three months in Burbank preparing for and taping Season 6. She also took part in a cooking boot camp where she picked up more than a few pointers on plating and presentation.


Sandoval never had any formal training and is mostly self taught. But she’s been cooking since she could hold a mixing bowl and has long been inspired by her mother’s recipes. Now she is passing on her family’s recipes to her 10-year-old daughter.


“Cooking is love in our family,” she said. “It’s an opportunity for us to enjoy each others company, learn, savor, show each other how much we care about each other.”


Since Sandoval was crowned in September, nothing has been the same.


“Every aspect of my life has changed,” she said. “For one, I used to have a 9-to-5 job. Now I have my own business doing catering and providing private dining experiences in people’s homes, along with various events with different restaurants around town. It’s been a whirlwind, but I’ve enjoyed every minute of it.”


She said Grossmont College, where she studied philosophy, played a vital role in her evolution to reality show champion.