At 17, Grossmont College's youngest grad preparing to transfer to UC Davis as a junior

Amazing stories arise every year from the graduating classes of Grossmont and Cuyamaca colleges. Here's one about a gifted athlete who's been recruited to play Division 1 soccer as an incoming junior. And she's all of 17!

Most days, Grossmont College student Hinsseenee Regassa is a blur of motion, always in a hurry to get things done.

That drive for speed serves her well on the soccer field as an elite player with Olympic and professional aspirations. And the same goes with her academic pursuits.

At 17, she is about to become the youngest graduate in the Grossmont-Cuyamaca Community College District’s Class of 2016. What’s more, the Santee resident has accomplished this feat with honors at Grossmont College in just a little over a year.


Come fall, Regassa will be playing soccer for UC Davis, where she will be a scholarship transfer as a junior.

Born in San Diego with parents emigrated from Africa, Regassa said her high school experience was an unhappy one, marred by ugly racial taunts and bullying.

Always an excellent learner, the constant harassment by students at her high school affected her deeply and her grades began to slip. By age 16, she decided she had had enough and took the California High School Proficiency Exam which she passed to earn the legal equivalent of a high school diploma.

She took the test in October 2014 and by spring 2015, she was in classes at Grossmont College. The environment there couldn’t have been more different, Regassa said, and she blossomed academically, earning mostly A’s in the seven classes she took her first semester.

“It was amazing – the diversity of people at the campus,” said Regassa, who as a child attended preschool in the college’s Child Development Center, where her mother, Fayine Morka, has worked many years as an aide. “The students are very open and accepting of others. The faculty and staff are the same way. Grossmont has so many resources for students like me, looking to learn more and do great things with their lives.”

She gives special credit to counselor Olivia Flores, who helped map out her education plan and never tried to dissuade her from her ambitious goal to quickly finish her degree to maximize her eligibility period as a Division 1 college athlete. 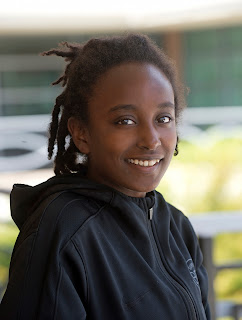 “She wasn’t skeptical at all – she saw that I was determined and she helped me reach my goals,” Regassa said. “I feel very fortunate and grateful to Grossmont College for making it possible for me to work toward achieving my dreams.”

She majored in communications and plans to do so again at UC Davis, where her soccer coach Twila Kaufman is effusive in her praise for the young athlete, calling her mind for the game “exceptional.”

“Certainly, greater things are in store for her,” Kaufman said.  “I have a deep belief in her ability to rise to the next level. This is why I recruited her. I think the world has yet to see what Hin can do. Currently she is always on the hustle to get herself in the right venues to grow.”

During Regassa’s six-year soccer club career as a member of San Diego United and San Diego Surf, her teams won U.S. Youth Soccer regional and national titles. Her success at the club level led to selection into the Olympic development program.

As for her post-collegiate plans, Regassa dreams of a future in professional soccer, music production, photography, and filmmaking. She already has one film to her credit, a short documentary, “Skin,” in which young black girls share stories as victims of racism. The work was shown in the 2014 San Diego Asian Film Festival.

“I like to be challenged,” she said about her busy life.
Posted by Della Elliott at 1:00 PM