At 80, Cuyamaca College's oldest graduate is ready for more

Amazing stories come out of the graduating classes of Cuyamaca and Grossmont colleges every year. Here's one about Cuyamaca's oldest grad who, at 80, isn't ready to call it quits.

Octogenarian Barbara Sue Adkins has the energy and grit that would put a person a generation younger to shame.

That the 80-year-old is the oldest graduate of the Grossmont-Cuyamaca Community College District’s Class of 2016 draws a chuckle and a contemplative pause  from the El Cajon resident, who has earned a certificate of achievement in Child Development from Cuyamaca College.
Only a couple classes shy of a full associate degree, Adkins has every intention to return to the college to finish what she started in 2010. Then it’s onward to a bachelor’s, she said.

“All my life, I had dreamed of going to college, but I was raised in a time and place where women weren’t encouraged to get an education,” said the Kentucky native, a former Navy wife who moved to the West Coast when her first husband was stationed in San Diego. “I did what was the norm, which was to get married and have children.”
After her marriage crumbled and Adkins found herself as a single mother of five, she met and married a man whose infant grandson, Jesse, she adopted when she was 52. That marriage ended as well, and Adkins was single again, this time with a special-needs child in her care. 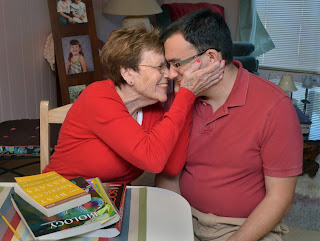 Diagnosed with autism and attention deficit/hyperactivity disorder, or ADHD, with Adkins’ nurturing, Jesse flourished in his schooling. He regularly made the dean’s list and graduated in 2010 with an Associate in Science in computer networking from Cuyamaca College.


Jesse found work not long afterward and with the gratitude of a loving son, he insisted on Adkins finally pursuing the college education she had always dreamed of since her high school graduation in 1953.

“God works in mysterious ways,” Adkins said. “I married a man who was not good for me, but because of him, I met Jesse and Jesse is the one who inspired me to return to school, something I really, really wanted to do.”

Having raised six children, and being the grandparent of 12 grandchildren and 22 great-grandchildren, Adkins had a natural affinity for caring for toddlers, and she happily started her coursework in Cuyamaca’s Child Development program, with an emphasis in preschool education.

“I loved every minute of going to Cuyamaca,” Adkins said. “There was never a morning I woke up and dreaded going to school. Kids are my passion, especially the ones with special needs. Raising Jesse, it was trial and error, but I figured if he could turn out as well as he did, maybe there will be another child I can help somewhere along the line.”

Spurred by the help and encouragement of instructors and students, Adkins completed the classes for her certificate of achievement with a GPA “somewhere above a 3.0.” Sidelined by cancer in 2012, she missed nearly a year of classes, but returned in 2013 when her doctor declared her cancer-free.

“I absolutely loved Cuyamaca,” she said. “I didn’t know how students would react to someone so old in class, but they were absolutely fantastic – they never treated me any differently than they did others in the class, although there was one young man in my English class who always offered to help carry my books.”

Adkins remembers one fellow student in particular who confided in her that her daughter always questioned why at her age, she was still going to school.

Since completing her coursework for her certificate of achievement, Adkins said she is more than ready to return to Cuyamaca to finish the requirements for her associate degree.

“I would do it all again in a heartbeat,” she said.
Posted by Della Elliott at 7:30 AM