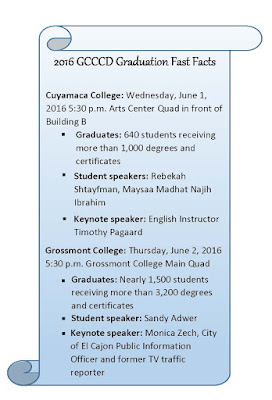 A busy academic year highlighted by new leadership at Grossmont and Cuyamaca colleges culminates with commencement ceremonies June 1 and 2, where more than 4,200 degrees and certificates will be awarded.

Both commencements begin at 5:30 p.m. Cuyamaca College, at 900 Rancho San Diego Parkway in Rancho San Diego, will hold its 38th annual ceremony led by President Julianna Barnes in front of the B building, the Communication Arts Center. President Nabil Abu-Ghazaleh will lead the 55th annual ceremony in the Main Quad of Grossmont College, at 8800 Grossmont College Drive in El Cajon. Both Abu-Ghazaleh, who started working at Grossmont College in July 2015, and Barnes, who started at Cuyamaca College in October 2015, will be leading their first commencement ceremonies.
Grossmont-Cuyamaca Community College District Chancellor Cindy L.
Miles said an increasing number of students are graduating from the two
East County colleges as the result of student success initiatives that encourage students to persist in their classes and achieve their educational goals.

“Our goal at our colleges is always to do whatever we can to help our students succeed,” Miles said. “We’re proud of every one of our graduates and all that they have done to transform their lives through education.”
﻿
Cuyamaca College commencement

The keynote commencement speaker at Cuyamaca College will be Timothy Pagaard, an English instructor at the college since 1996. A teacher of rhetoric and literature, Pagaard was elected teacher of the year for 2000-2001 and again for 2010-2011 by the Academic Senate.

Pagaard previously taught at Southwestern College and in the Sweetwater Union High School District. Before becoming a full-time educator, Pagaard worked for nearly 20 years in the advertising industry.

Pagaard said that working at Cuyamaca College has been the fulfillment of a lifelong dream, and he never regretted the career shift.

“I’ve never been happier about a decision and these have been the best 20 years of my life,” he said.

Giving the valedictory speech will be Maysaa Madhat Najih Ibrahim, an Iraqi refugee who graduates as one of six to earn perfect 4.0 GPAs. She heads to San Diego State University in the fall on her way toward becoming a Spanish teacher.

“I want to encourage students, single mothers and refuges to continue their education because nothing is impossible to achieve with hard work,” Ibrahim said.

Ibrahim grew up in Baghdad, but in 2006 was forced to flee the Iraqi capital for Damascus, Syria, with her baby daughter. She moved to El Cajon in 2011 and almost immediately began her educational journey here.

After enrolling in adult school to learn English, she took a continuing education course at Cuyamaca College in 2012 before becoming a fulltime student in 2013. She majored in Spanish and held down several jobs at the college as a student worker, tutor and peer advisor working with single mothers.

Also speaking at Cuyamaca College will be honors graduate Rebekah Shtayfman, whose past as a high school dropout and homeless teenage single mom is a story sure to inspire. She has been accepted to UCLA, where she starts in the fall as a physics major.

Shtayfman said watching kids’ TV shows like “Bill Nye the Science Guy” and “The Magic School Bus” sparked an early interest in science, but her schooling was interrupted when she dropped out of El Cajon Valley High School as a junior. She became a mother at age 18, and went through stints of homelessness as she struggled to make a life for herself and her baby.

Even working 30 hours a week, she decided to give college a go, enrolling at Cuyamaca College on the recommendation of a counselor. Shtayfman proved to be a stellar student, earning a 3.5 grade point average, joining the Phi Theta Kappa Honor Society and serving as a student tutor in mathematics and physics.

Monica Zech, public information officer for the City of El Cajon, former TV traffic reporter and former Grossmont College student, will be the keynote speaker. Zech never graduated from Grossmont College, but she will receive an honorary Associate of Arts degree from the college at the commencement ceremony to recognize her professional accomplishments and as a high-profile advocate of driver safety.

Zech said she chose to attend Grossmont College because of the strength of its communications program. During her attendance in the early ‘70s, she was hired for a fulltime job in radio news, the start of a 30-year broadcast career that included an 18-year run as San Diego’s first television air traffic reporter for the Automobile Club of Southern California.

Grossmont College’s student commencement speaker is Sandy Adwer, who is graduating from the college with an Associate of Science degree in University Studies with an emphasis in Math, Natural Science and Computer Science. In the fall, she will be attending the University of California, San Diego, where she will pursue a bachelor’s degree in biology, with plans to eventually attend medical school to become a physician.

Adwer said the years of violent upheaval took an emotional toll. Even the opportunity to start up her long-delayed education as a Grossmont High School student failed to counter her depression and debilitating self-doubt.

But then came her introduction to Grossmont College and what Adwer describes as the reawakening of her spirit.

“It was like I was born again,” Adwer said. “For the first time in my life, I was filled with hopes and dreams.”

In addition to getting hired as a student worker in the college’s Extended Opportunities Programs and Services office, Adwer said it was the EOPS counselors, faculty and others at Grossmont who made her realize her own potential. She was a stellar student and became more engaged with the campus, serving student government and joining student clubs. She also volunteered translating for Iraqi patients at a local doctor’s office.

When the opportunity arose for Adwer to compete for the coveted role as the student commencement speaker, she didn’t hesitate. She was selected out of more than 30 applicants.

“I have a story that needs to be told,” she said. “If I can help inspire one student out there and help them realize they can do anything they set their hearts to, that is my mission.”

Governing Board President Bill Garrett said the commencement ceremonies constantly remind him of the life-altering impact of community colleges.

“Our graduates received a stellar education, and the opportunities they face are truly boundless,” Garrett said.

The Grossmont-Cuyamaca Community College District has been serving East County since 1961. Grossmont College has more than 18,000 students, and about 9,000 students attend Cuyamaca College. For more information, go to www.gcccd.edu.