Five instructors at Grossmont and Cuyamaca colleges have been selected by their peers as the academic year’s best faculty members. The honorees were lauded at fall convocations for exemplary service to the East County campuses.

Here's a profile of one of the recipients, the fifth of an occasional series: 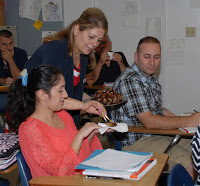 Aklas Sheai
Arabic instructor Aklas Sheai does her best to make her Cuyamaca College students feel at home from the moment they walk into the classroom. From the welcoming sound of their native language to Sheai’s daily practice of bringing Middle Eastern snacks, the roomful of mostly Iraqi refugees appreciate the effort.

Sheai, who immigrated as a Chaldean refugee along with her husband, son and daughter in 2005, graduated from Cuyamaca and became an adjunct instructor in 2008. A repeat winner of the Outstanding Adjunct Faculty Award from 2014, her contributions to the college have been many, not only as a popular instructor, but as a counseling office test proctor, peer adviser and translator, and producer of an annual stage extravaganza showcasing the Middle Eastern culture.


“Her dedication is beyond imagination,” one person wrote in nominating Sheai for the faculty honor. “She puts her heart, mind, and soul into the teaching profession. She is also able to have students from various religious and ethnic backgrounds to work together to promote a cultural understanding through the expression of arts.”

A former teacher in her native Iraq with a bachelor’s in statistics, Sheai worked with the United Nations, but after receiving death threats for being regarded as pro-Western, she sought refuge in the United States. Currently pursuing her master’s in ESL/Bilingual Education, she calls her teaching position at Cuyamaca College her “dream job.”

“Getting recognized by my colleagues for the second time filled my heart with joy and my eyes with tears as I heard my name announced,” she said. “This recognition was not only a reward for my work on campus, but also a token to keep me going to serve this campus and its students. I love Cuyamaca and being part of this family of inspiring educators.”