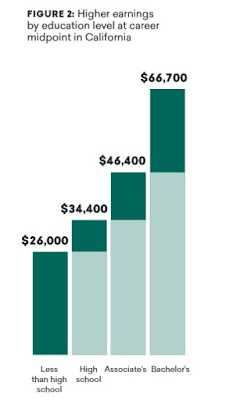 A just-released analysis shows the Grossmont-Cuyamaca Community College District annually generates more than $1 billion in increased economic activity in San Diego County, providing jobs to thousands and touching the lives of many as its impact ripples throughout the region.

The comprehensive report, based on data from 2014-15, was conducted by Idaho-based Economic Modeling Specialists Inc. The study analyzed spending by the college district on operations and payroll, the monetary benefits of a college education, and the savings to taxpayers through lower social service costs as the result of well-trained and employed alumni. 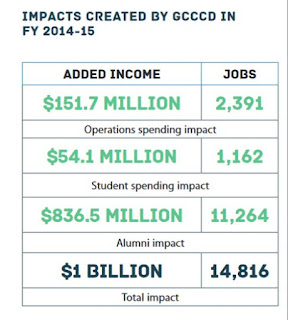 The study shows that the district’s operations, such as its almost 2,000 employees, purchases and other expenses, have a $151.7 million impact on the San Diego County economy. The district’s economic footprint grows exponentially through more than $54 million in student spending, and an economic impact of more than $836 million from the thousands of alumni who benefitted from their education at Grossmont or Cuyamaca colleges and are continuing to work in the area.

It also factored in the so-called “multiplier effect,” which refers to the generation of jobs that occurs when employees, students and alumni spend their paychecks on food, housing, and leisure. The report also noted the benefits of the college district to the state and local government in increased tax revenues and public sector savings, such as a decrease in costs for healthcare, crime and unemployment.
“The study affirms what we have always known -- the college district is a valuable resource, benefitting students, local businesses, and taxpayers, and contributing strongly to an improved quality of life,” said Chancellor Cindy L. Miles. “Students benefit from increased earning power and quality of life. Local merchants and businesses benefit from the district’s crucial role as a major economic driver that contributes increased consumer spending. Local employers depend on the college district as a steady source of well-trained workers capable of meeting the demands of today’s workplace.”

The study found that the average graduate earning an associate degree from Grossmont or Cuyamaca College will receive about $492,000 higher earnings in their lifetime than someone with only a high school education.

For every dollar students invest in their education, they receive $3.50 in higher future earnings. The return on their investment in their education is 14.5 percent, far better than the typical 7.2 percent return in the stock market over 10 years.

Taxpayers also benefit at a nearly 3-to-1 rate when students have a better education that enables them to get a better-paying job and pay more taxes. The study found that or every dollar that taxpayers contribute to the college district, they get a return of $2.90 in added state revenue and social savings.
The report also points to the benefit of a community college education to society as a whole, with the creation of a more prosperous economy and improved lifestyles that translate into a host of savings, including lower healthcare costs, and reduced welfare and unemployment. For every dollar invested by society, the return is $11.90, the study found.

“This analysis shows the tremendous benefit to students and the contributions our colleges make to the region and the state,” said Governing Board President Bill Garrett. “The economic footprint of our district is substantial, in terms of the dollars spent and invested in the region, and the impact on local businesses and taxpayers. Clearly, this study shows that dollars invested in this college district are an investment in the future of East County and the surrounding region.”

For the college district’s full report and highlights, go to www.gcccd.edu/about-us-area/economic-impact-report.html
Posted by Della Elliott at 2:16 PM