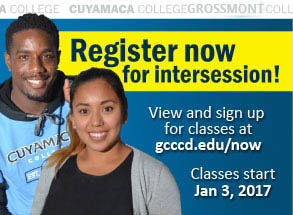 Registration is now open for spring intersession classes at Grossmont and Cuyamaca colleges. Students attend classes Jan. 3-28 and can complete a course, including those satisfying general education requirements, in just four weeks.

The deadline for registering is Jan. 6. The cost of the courses is the same $46 per unit that applies for regular-session classes, with most classes meeting daily for 2.5 hours and earning students three units.

Inventive Grossmont College OTA students up to their devices

Sometimes, it’s the everyday problems that complicate the lives of the elderly and physically challenged.

Like the simple act of pulling up a pair of slacks when dressing.

The 23 students in instructor Darlene Cook’s assistive technology course demonstrated their projects during the OTA program’s Ninth Annual Assistive Technology Show Thursday night that drew a steady stream of visitors, including professionals in occupational therapy and rehab, as well as fieldwork educators, and the families and friends of the students.

Read more »
Posted by Della Elliott at 10:39 AM No comments:

Grossmont and Cuyamaca colleges are partnering with industry leaders and others in creating an ambitious workforce development program in San Diego County and the Inland Empire to educate and train people from underserved populations at no cost for high-skilled, in-demand jobs, thanks to a new $6 million federal Department of Labor grant.

“This grant will help us transform what we do as community colleges by creating high-wage, high-demand opportunities that target underserved populations,” said Javier Ayala, dean of Career and Technical Education and Workforce Development at Grossmont College.

Read more »
Posted by Della Elliott at 5:07 PM No comments:

From package deliveries and aerial photographs to defense applications, the use of drones is expanding, opening up new careers in the technology behind the unmanned aircraft.
Grossmont College wants to become the first community college in Southern California to develop a program in drone technology and is testing the waters with a workshop, “Regional Careers in Unmanned Aircraft Systems (UAS),” noon-2 p.m. Monday, Nov. 28, in Griffin Gate in Building 60.

Read more »
Posted by Della Elliott at 4:14 PM No comments:


Grossmont College played a key role in his journey.


“Grossmont was the perfect stepping stone for me,” he said. “I got an amazing education – the quality was just as good as San Diego State, if not better. And it led me on a path to where I wanted to be. I couldn’t have asked for anything more.”

The Basket Brigade of San Diego, a local non-profit group that provides Thanksgiving Day food baskets to families in need, is partnering this year with Grossmont College to recruit volunteers and donors to bring a holiday meal to hundreds, including students at the community college and their loved ones.

The group is seeking contributions and helpers to assemble and deliver food baskets from 10 a.m.-2 p.m. Saturday, Nov. 19, in the back half of the cafeteria in Griffin Center (Building 60.)

Gerardette Nutt, a CalWORKs program specialist at Grossmont College, said a student worker in her office got involved last year with the Basket Brigade and proposed a college partnership to bring turkey and all the fixings to more of the program’s students and their families. Some 700 students annually receive educational support and resources through the program that serves students receiving welfare.

Meet Jennifer Padilla, a former student at both Grossmont and Cuyamaca colleges who has been recognized as one of Balboa Park’s rising stars.


Padilla, who serves as director of visitor services at the Natural History Museum, was honored with the Betty Peabody Emerging Young Leader of Balboa Park Award during the Friends of Balboa Park Annual Awards Luncheon on Oct. 18. The award recognizes exceptional promise and potential of emerging professionals who have demonstrated leadership by example in San Diego’s most famous greenbelt.


A native of Orange County who grew up in Temecula, Padilla attended San Diego State University right after earning her high school diploma. It wasn’t cheap. Working full-time to make ends meet, Padilla took several general education courses at Grossmont and Cuyamaca over the summers to keep her tuition in check.


She was not disappointed.


“I have nothing but positive things to say about both Grossmont and Cuyamaca colleges,” said Padilla. “The quality was no different than at San Diego State. It wasn’t like I got a lesser education. In many ways, it was better. The classes were smaller, the professors were more engaging, and I got a lot out of it.”

Read more »
Posted by Grossmont-Cuyamaca Community College District at 9:06 AM 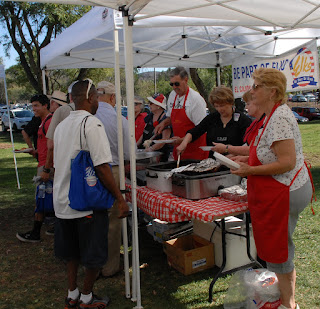 Adrian Tolbert has found a home at Grossmont College. Now the Grossmont College student and football player has his sights set on a football scholarship to a major Division I program and a possible future as an NFL wide receiver.

As a senior at Castle Park High School in Chula Vista, Tolbert was recruited by several universities, but his grades were not good enough to enroll. He decided to enroll at Grossmont College, bring his grades up to par, and work on his football skills.

Tolber is developing into a star. At 6 feet, 5 inches tall and about 210 pounds, he has produced a collection of highlights as a leading receiver on the Griffin squad. After hauling in six receptions for 140 yards and three touchdowns against College of the Canyons in Santa Clarita north of Los Angeles, he was named the Pacific Coast Athletic Conference's Oct. 3 Athlete of the Week. Three weeks later, he again surpassed 100 yards receiving and caught another three touchdown passes in a shootout loss to Saddleback College.

He's drawn the attention of recruiters at the University of Utah and Brigham Young University. He credits Grossmont College for helping him turn his life around.

"I feel comfortable at Grossmont," said Tolbert, who has worn No. 13 on his jersey since his days at Castle Park. "The environment is welcoming and there are a lot of resources to help you out. And the football program's priority is on developing the players as people first." 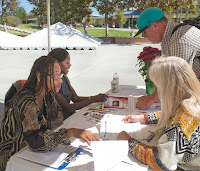 With an eye toward hiring 300 part-time instructors at both of its colleges for the upcoming spring semester, the Grossmont-Cuyamaca Community College District is holding its first Adjunct Recruiting Event from 9 a.m.-noon Saturday, Nov. 19, at the Grossmont College Main Quad.

Fortified by additional state funding to promote student success, the college district will be offering 12 percent more classes in spring 2017 than the previous spring semester. Grossmont and Cuyamaca colleges are holding the event to reach a diverse pool of applicants as instructors for the general education and career technical classes.

Read more »
Posted by Della Elliott at 4:52 PM No comments:

Ask Mary Eden why she has spent the past quarter century working at community colleges, and she’ll answer without hesitation. “There’s nothing better than helping somebody succeed in getting an education,” she said.

Eden, who is Cuyamaca College’s acting counseling services supervisor, launched her community college career as a staffer in the Assessments Office at Scott Community College near Davenport, Iowa, upon earning an associate degree from the school. After seven years in a variety of posts that included working as an administrative assistant to the college registrar, she and her then-boyfriend – whom she would later marry – decided to leave the brutal winters behind, take a leap of faith, and move to San Diego.

Eden quickly found work at the San Diego State University Admissions Office. Less than a year later, she was hired as student services assistant at the Grossmont College Counseling Office, where for the next 15 years she did everything from scheduling appointments to helping out with outreach activities.

From participating in a parade along Harbor Drive in San Diego to a barbecue courtesy of the El Cajon Elks Lodge, both Grossmont and Cuyamaca colleges plan a number of activities in commemoration of Veterans Week Nov. 7-10.


With about 1,500 veterans enrolled for the current semester at East County’s only public institutions of higher education, both current and past members of the armed forces are a significant and valued presence within the college communities.


Both colleges have Veteran Affairs or Veteran Services offices serving as a liaison between college and the U.S. Department of Veteran Affairs for, among other things, certification for VA educational benefits. Resource centers are also in place, providing a central entry point for veterans as they transition from the military into the college communities. The centers offer a collaborative delivery of student services such as those tailored for students with disabilities and those needing counseling or access to assistive technologies. The colleges also have a longstanding practice of giving military personnel and veterans top priority in registering for classes.

Read more »
Posted by Grossmont-Cuyamaca Community College District at 10:15 AM

Nicole Jones once thought about becoming an attorney. For the thousands of students she has impacted at Cuyamaca College over the past years, it’s a good thing she changed her mind.


Hired as a full-time counselor in 2008, Jones since last fall has been serving as the Interim Dean of Counseling Services at the Rancho San Diego campus, a position responsible for overseeing not only the Counseling Department, but also high school and community relations, the Student Success & Support Program (SSSP), Assessment, Veterans, the First Year Experience, Transfer, Career, CalWORKS, Disability Support Programs & Services (DSPS), and Extended Opportunity Programs & Services (EOPS).


“The great thing about Cuyamaca College is that students come first,” Jones said. “It always comes back to the students and how we can best serve our students so they can be successful.”


Born in Chicago and raised in San Diego, Jones attended Long Beach State University to earn a degree in criminal justice after graduating from Madison High School in 1990. Before going to law school, she wanted to get some work experience and landed a counseling job at Bayview Community Development Corporation, a faith-based San Diego nonprofit group. She soon realized she had found her calling as a counselor and secured her master’s degree in marriage and family therapy at San Diego State University.