March was a winning month for the Grossmont-Cuyamaca Community College District, with its Marketing and Communications Office receiving two awards for its 2015-16 Annual Report to the Community: In Their Own Words. 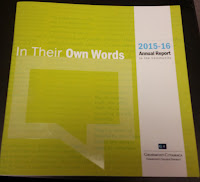 A gold Paragon was announced this week at the National Council for Marketing and Public Relations national conference in Charleston, S.C. The coveted prize is the only national award for marketing and communications excellence in community and technical colleges. This was the third year running for the Grossmont-Cuyamaca district to win a Paragon award for its annual report: a bronze in 2015, a silver in 2016, and gold in 2017.

The college district was also awarded a silver Paragon for its dramatic photo of a goalie on Cuyamaca College’s men’s soccer team making a diving save to prevent an opponent’s score.

More than 1,800 entries from 247 colleges across the United States, Canada and other countries were submitted in the NCMPR Paragon competition.

Earlier this month, the annual report picked up a silver award in the Council for Advancement and Support of Education (CASE) District VII competition. The awards were announced March 8 at the District VII conference in San Diego.

The college district was the only community college to win in the entire competition, with the majority of awards going to schools in the California State University and University of California systems, as well as private institutions such as the University of Southern California and Brigham Young University. CASE is a professional association serving educational institutions and the advancement professionals who work on their behalf in alumni relations, communications, development, marketing and allied areas.

Posted by Della Elliott at 2:29 PM