The free, family-friendly event from noon to 4 p.m. will feature two outdoor stages on the Grand Lawn with six local bands playing homegrown music ranging from alternative rock to folk.


The students benefit from Cuyamaca College being the only school in the county to offer a transfer degree program that combines training in music theory, literature and performance with studies in music technology and business. That mix of instruction helps students develop as musicians, learn to operate and use the college’s recording studios, work with bands to create demos and other promotional materials, and to plan and produce concerts and festivals with multiple stages. 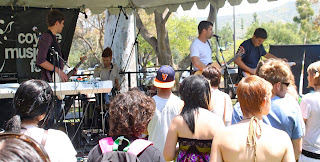 “The Coyote Music Festival is a great way for the community to enjoy original live music in a relaxed setting and it offers students invaluable experience in producing a major event that teaches them a multiplicity of skills,” said Annie Zuckerman, a Business Office Technology instructor who teaches the marketing and promotions aspect of the event.

Team teaching the course is Taylor Smith, head of the college’s performing arts program who is also a musicologist and performing artist.

The Coyote Music Festival is the culmination of a semester-long project that teaches students all the production aspects, including planning, auditions, promotions, staging and sound engineering. The class called the Music Industry Seminar is a course so rich in content that students are able to take it up to four times, each year learning a new aspect of putting on an event of the music festival’s scale.

The musicians or bands and their scheduled performance times are:
“The students do a good job putting on the festival,” said Dempsey, the award-winning musician also making a second appearance at Cuyamaca College. “I think the program the college is offering is great – anything that has to do with music education 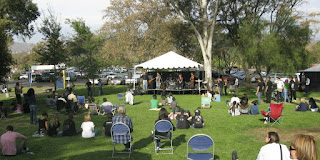 is a good thing and I feel like I am contributing to a worthy effort. And the class where they put on this festival is not a music course per se, it teaches students about production. If I were not a performing musician, I probably would have gone in that direction, myself.”

For further information, contact Taylor Smith at (619) 660-4627 or visit www.coyotemusicfest.com or www.facebook.com/CoyoteMusicFestival/

Information about the Music Industry Studies program can be found online.
Cuyamaca College is at 900 Rancho San Diego Parkway, El Cajon, California 92019.
Posted by Della Elliott at 10:36 AM