A just-completed air-conditioning plant built to serve new structures in Grossmont College’s near future is being hailed not only for its good looks, but its nearly 70 percent reduction in energy costs. 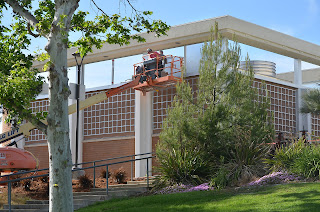 The $8 million, 2,700-square-foot chiller plant that serves the cooling needs of the entire campus marks a milestone for Proposition V, the $398 million bond measure approved by East County voters in 2012. The chiller is the first structure to be built using Prop. V funds, although numerous other projects have been completed at Grossmont and Cuyamaca colleges, including renovations at the Cuyamaca College Exercise Science Building and track, and upgrades to the electrical system at Grossmont College.


Those who pass by the chiller plant may never know its true function, but college officials are OK with that.

The new plant, which houses a 21,000-ton high-efficiency chiller, massive pipes and three stainless steel cooling towers, could be mistaken at first glance for a classroom building. 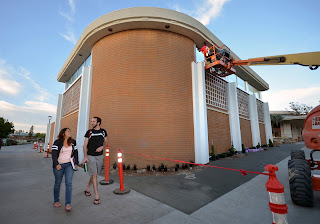 Contractors faced the challenge of transforming an aging, water-wasting central plant into a modern, more efficient facility to meet the demands of more buildings, but at substantially less cost, while making the structure in the center of campus aesthetically pleasing. The cooling towers provide chilled water for air-conditioning while reducing demand on the power grid, but their visual impact was an issue.

“From the start it was made clear that the college didn’t want something that looked like a mechanical building in the middle of the campus,” said Ken Emmons, senior director of Districtwide Facilities.

To shield the cooling towers from full view, the chiller plant’s exterior walls are 27 feet tall, about 2.5 stories in height. Large windows with obscure glass hide the towers even further. To break up the mass of the building’s exterior, plant screens were installed that will allow greenery to partially cover the block walls.

“The energy efficiency of the central chiller plant and its architecture that fits in with the campus are examples of sustainable design,” said college president Nabil Abu-Ghazaleh. “More crucially, this chiller is an infrastructure project that will provide air-conditioning capacity for the coming major Prop. V projects that we can now break ground on.”

The low-water use and low maintenance of the drought-tolerant landscaping are among the cost savings for the improved chiller plant, along with upgrades in electrical infrastructure and the increased efficiency of chilled water piping and improved condenser units. Operators who were targeting a 30 percent reduction in energy costs with the plant’s expansion are ecstatic about the estimated 223,000 kilowatt hours annually that the plant will cut, a 68 percent energy savings per year.

With cost savings from both the energy- and water-saving chiller plant and its ability to cool the campus’ 864,000 square feet of interior space more efficiently, the district hired Architects Mosher Drew to design an exterior that was true to the look of the rest of the campus. As a key part of the district’s overall energy-conservation plan, construction of the chiller plant was partially paid for with state Proposition 39 funds, a 2012 measure that set aside billions for energy-efficiency upgrades of the state’s public schools.

To qualify, the district had to show the project met energy-reduction criteria measured in kilowatt hours per year.

“We proved to the state that the energy savings are so good the project was approved for two years’ funding even before the actual distribution of monies began,” said Fred Parker, program manager for the construction management firm, Gafcon. 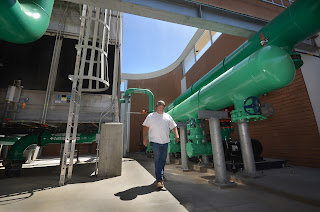 Energy management systems and sensors added to the plant ensure that when doors are left open, mechanical heating and cooling will shut down, creating additional energy savings.

The expansion and upgrade of the central chiller plant, which began in January 2016, was the first major Prop. V building to be completed because it is needed to serve the needs of other new facilities, including the Teaching and Performance Theater and a Science, Math and Career Tech Complex.

A June 14 groundbreaking is expected for the Performing Arts Complex, which will include a 390-seat theater with a stage, orchestra pit and balcony, and which will also house the Hyde Art Gallery.

The first phase of the two-building Science, Math and Career Tech complex is the renovation of Building 31, a low-slung structure that is among the 56-year-old college’s original buildings. Construction is expected to begin in winter 2018.

At Cuyamaca College, major projects include the refurbishing of the college’s popular track, expected to be completed by the end of May; the renovation and expansion of the Ornamental Horticulture Complex and a new Student Services Building, which will house offices for Admission and Records, Financial Aid, and Counseling, in addition to a veterans center. Construction of the Student Services facility is expected to begin in fall 2019. The OH Complex construction is expected to begin April 2019.


The Grossmont-Cuyamaca Community College District serves about 30,000 students each semester, about 20,000 at Grossmont College and almost 10,000 at Cuyamaca College. For more information about the colleges, go to www.gcccd.edu
Posted by Della Elliott at 3:23 PM