﻿
A new award honoring individuals who have made notable contributions to the Grossmont-Cuyamaca Community College District and the East County community was presented last night to El Cajon residents Bill and Judy Garrett.


The recognition, named the Bill and Judy Garrett Civic Leadership Award, was presented to the Garretts to honor their leadership on district boards and their financial support of Grossmont and Cuyamaca College students.


“The Garretts have given tremendously of their time and their money, but most importantly their wisdom and leadership, to the college district,” said Chancellor Cindy L. Miles. “The contributions that Bill and Judy have made change lives every day around this college district.”

Read more »
Posted by Grossmont-Cuyamaca Community College District at 8:04 AM

Career- and job-minded students and the public can get a two-fer in the form of a career expo and apprenticeship fair at Grossmont College in October.

Cuyamaca College’s Ornamental Horticulture Department has helped transform an underutilized patch at a San Diego elementary school into a community reading garden and gathering spot where parents are getting to know each other and teachers are taking their lessons outdoors.


“Cuyamaca College was amazing,” said Wegeforth Elementary School Principal Lori Sandoval. “This project really came together beautifully and is a wonderful addition to our campus.”


The effort evolved following a recent natural gas leak prompted repairs that yielded an area at the front of the school near San Diego’s Montgomery Field into an afterthought. Sandoval and teacher Isabelle Farrell saw an opportunity to grow the site into a landscaped area where parents could congregate while waiting to pick up their children from school and where teachers could take their students for lessons al fresco. After the two secured a nearly $5,000 Lowe’s Toolbox for Education grant for materials, they reached out to Cuyamaca College’s award-winning Ornamental Horticulture program for help in pulling off their vision.
Read more »
Posted by Grossmont-Cuyamaca Community College District at 1:05 PM 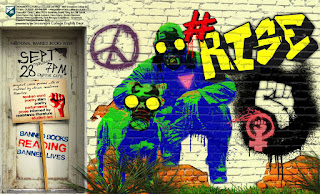 The Grossmont College English Department will launch its annual Fall Reading Series with its “Banned Books/Banned Lives” event that coincides with National Banned Books Week and takes place 7 p.m., Thursday, Sept. 28, in Griffin Gate.
“Banned Books/Banned Lives: #RISE” is a student-led reading that will feature spoken word poetry and performance prose by students, faculty and administrators that celebrate freedom of expression and raise awareness about censorship and persecution. Original works are paired with or inspired by resistance literature. The event is free and open to the public.
Read more »
Posted by Della Elliott at 11:56 AM No comments:

Salsa Under the Stars at Grossmont College 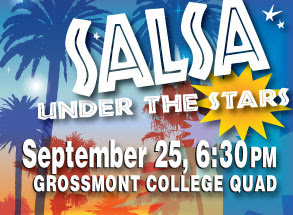 If salsa music gets your hips swaying, but you’ve got two left feet on the dance floor, Grossmont College’s “Salsa Under the Stars” is just the perfect evening starting at 6:30 p.m. Monday, Sept. 25.

Complete with free dance lessons an hour before the main event, the music department’s “Salsa Under the Stars,” is a fundraiser for student scholarships and a CD release celebration for music instructor and internationally known salsa bandleader, composer and recording artist Manny Cepeda.

Randy Voepel: From Grossmont College to the state Legislature


﻿
After serving eight years, eight months and 21 days in the Navy during the Vietnam War, Randy Voepel returned home to El Cajon in 1978 unsure about his future and with his mind affected by the horrors he had witnessed during his military service.
“I had PTSD (post-traumatic stress disorder), but I didn’t know it,” said Voepel, now an assemblyman representing eastern San Diego County in the state Legislature. “We didn’t know what it was. They simply said we were shell-shocked.”
Voepel enrolled in Grossmont College through the G.I. Bill and he credits his experience there with saving his life during that troubled time. He said having the goal of obtaining a college education, along with the support he received, helped him deal with the challenges he was facing.
Most importantly, he said, Grossmont College provided a place where he could connect with other veterans.
“I needed support and camaraderie with other veterans. Grossmont College provided that,” Voepel said. “I simply persevered. If a veteran gets up in the morning and perseveres, then they have a chance of success.”
Read more »
Posted by Grossmont-Cuyamaca Community College District at 8:00 AM

Talk about taking it up a notch. The 2017 edition of the Fall Concert Series at Cuyamaca College will include a trio of world-class musicians from as far away as New York who will perform the first in an ongoing calendar of classic concerts underwritten by a well-known patron of the arts.


The Camera Lucida Piano Trio will play music by Mozart and Brahms during an Oct. 3 concert at the Cuyamaca College Performing Arts Theater. The Camera Lucida Piano Trio comprises pianist Reiko Uchida, who teaches at Columbia University in New York and who has appeared as a soloist with the Los Angeles Philharmonic and a number of other orchestras around the world; violinist Jeff Thayer, who holds the Deborah Pate and John Forrest Concertmaster Chair of the San Diego Symphony; and internationally renowned cellist Charles Curtis, a graduate of Juilliard who teaches at UC San Diego.


The concert is being underwritten by Sam Ersan, who has helped transform the chamber music landscape of San Diego.
Read more »
Posted by Grossmont-Cuyamaca Community College District at 3:08 PM

Michael P. Ryan had just $800 in his pockets when he walked out of Chino Institution for Men a free man in the fall of 2015. Today, the 56-year-old East County resident who has spent more than half of his life behind bars is building a new future at Cuyamaca College, where he has a GPA just shy of 4.0, is a member of the Phi Theta Kappa Honor Society, and is steadily moving toward a new career in the water and wastewater industry.


Being named the new president of the American Water Works Association for the California-Nevada Section’s student chapter – which includes the likes of UC Davis, San Diego State University and the University of Nevada, Las Vegas – won’t hurt him in reaching his career goal.

“I couldn’t have done any of this without the people and programs that are available here at Cuyamaca,” said Ryan, who hopes to transfer to San Diego State for a bachelor’s degree in environmental sciences. “Everything is top shelf, from the Health & Wellness Center to the counseling staff to the financial aid people and the auxiliary support. Everything and everyone is aimed at getting you what you need to succeed. I have nothing but good things to say about what is truly a great college.”

“I’m honored by the recognition,” said Ryan. “I can’t say ‘Thank you’ enough.”

Read more »
Posted by Grossmont-Cuyamaca Community College District at 9:53 AM

Jesus Suarez, the new Associated Student Government president at Cuyamaca College, has a passion for helping others and promoting equity for all.


Suarez was a force behind a new Contemplation Room at the campus Health & Wellness Center for those facing a crisis; was instrumental in establishing a food pantry for students who don’t have enough to eat; and was diligent in bringing frank discussions on topics such as the Black Lives Matter movement and feminism in the modern age to Cuyamaca’s Cross Cultural Center.


His dedication was recognized nationally in February when Suarez was just one of just six community college students from around the country named an Achieving the Dream scholar.


“Keeping busy is good,” said Suarez, who turns 23 in November. “I’d rather be busy trying to contribute than sit around doing nothing.”


Keeping busy is a bit of an understatement.

Read more »
Posted by Grossmont-Cuyamaca Community College District at 11:43 AM


The Grossmont College Latino Film Festival and a Cuyamaca College Latinx Heritage Celebration kick off an array of special events honoring Hispanic Heritage Month at the two East County colleges from mid-September to the end of October.

All events are open to the public and free, with the exception of “Salsa Under the Stars.”

Read more »
Posted by Della Elliott at 2:39 PM No comments: