Even while living in foster homes or on the streets, Charles Harrington was drawn to cooking, drawing inspiration from Food Network celebrities such as Rachel Ray and Bobby Flay. So when Harrington tired of the seemingly endless stream of minimum wage jobs and enrolled at Grossmont College, the Culinary Arts program was his first stop.


“It changed my life,” Harrington said.


Now the 32-year-old Spring Valley resident is on track to earn a certificate of achievement in baking and pastry next June, he’s working as a baker at San Diego State University, and he’s determined to open a delicatessen or perhaps a food truck.


He says he couldn’t have done any of it without Grossmont College, where he has secured a pair of scholarships to help support his dream.


“Every program I signed up for and everyone I saw, whether it was in counseling, EOPS, Umoja – it didn’t matter, they all helped make sure I was going to get where I needed to go,” Harrington said. “From the top administrators all the way to the teachers, they all want you to succeed.”


That type of support had been sorely lacking in the past.


Born in San Diego, Harrington said he grew up being shuffled from foster home to group home with occasional stops with his mom. He tried a San Diego community college shortly after graduating high school, but decided at the time that education wasn’t a priority. “I was moving from house to house, place to place, not really doing anything with my life but trying to get by,” he said.


Trying to get by, however, meant moving from one minimum-wage job to another. When Harrington’s now 5-year-old son came into his life, he decided it was time to go back to school and pursue his dream of a culinary career. Familiar with Grossmont College after taking a pastry course at the school once before, Harrington enrolled at the El Cajon campus  –  this time more determined than ever to succeed. 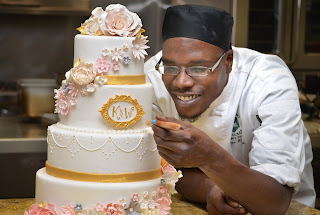 He gives much of the credit to culinary arts instructor/coordinator and executive pastry chef James Foran. “Chef James is the reason why I’m in school and he’s the reason I’m staying in school,” Harrington said. “He pushes you to do better, but he’s very supportive.”


“He’s a super-motivated student who is really enthusiastic about learning,” Foran said. “He comes here before class, he comes here after class, he even comes into classes he’s not enrolled in. He’s just really utilizing what the college has to offer and he’s definitely on course to becoming a very good chef.”


“I’ve just always loved cooking and baking,” said Harrington, who is known for memorizing cooking techniques by incorporating them into rap lyrics. “It’s an art. You have to develop your skills, you have to be passionate about it, and you have to have desire. I really don’t want to do anything else.”


As for the challenges he’s had to overcome along the way, Harrington said: “Obstacles create character, achievements prove that one is working hard and goals show that one is planning. To live doesn’t always mean coasting on the edge or crazy partying. Sometimes it’s striving for something that gives one the greatest joy in the world. When I wake up and go to school, I feel as if I’m really living. I plan to be the first in my family who will graduate college.”