After an hour of salsa lessons from Latin dance instructor David Luu, who brushes aside excuses of even the most rhythm-challenged, bull-in-a-china-shop dance dilettantes, you’ll be ready to dance the night away.

Tickets are $20 for general admission and $10 for students, with proceeds going to the Grossmont College Music Scholarship program. Tickets can be purchased at the Main Quad on the evening of the performance or online with the tickets picked up at will-call in front of Bldg. 26, Room 220.

The event starts with free salsa dance lessons from 5:30-6:30 p.m., followed from 6:30-9 p.m. by the 13-piece Manny Cepeda Orchestra, which blends classic salsa with Cumbia, Afro-Cuban and World music. In addition to playing original pieces including those from his classic salsa CD, “Padre Querido,” Cepeda is adding some Afro-Cuban cover songs from the Buena Vista Social Club. He also plans to add a dash of cumbia and merengue sounds. 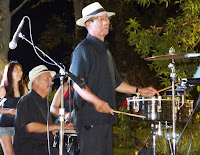 “This will appeal more to the fans and the audience will recognize some of the cover tunes,” Cepeda said. ”It is a pleasure for us to be part of helping our music department students achieve their dreams."

A mainstay on the salsa circuit in San Diego for the past 13 years, Cepeda’s first salsa album, “Bomba & Plena,” debuted in 2014 and has been featured at top clubs and festivals, including Gator by the Bay and the Chula Vista Harbor Fest. Cepeda’s orchestra plays a unique fusion of salsa and other rhythms from his past as an enlisted bandleader in the U.S. Navy who traveled the world. Cepeda leads an international group from his native Puerto Rico, where he was raised in a musical family, as well as other band members from Panama, Japan and throughout the United States.

The Grossmont-Cuyamaca Community College District serves about 29,000 students each semester, nearly 19,000 at Grossmont College and almost 10,000 at Cuyamaca College.  For more information about the colleges, go to www.gcccd.edu

Posted by Della Elliott at 2:45 PM