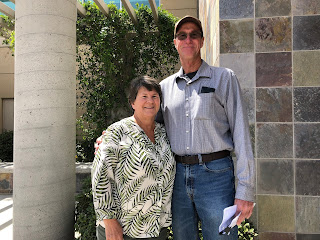 Teresa Greenhalgh is a pro when it comes to firsts. She was at Valhalla High School when it first opened in 1974. She was one of the first members of Steele Canyon Charter High School’s governing board. And she was among the first 1,947 students to enroll at Cuyamaca College when the campus opened 40 years ago Aug. 28.

She also met her husband and fellow first-year Cuyamaca College student, Darren, at the campus. These days, both are among the dedicated Cuyamaca College faculty and staff celebrating the campus’s 40thanniversary this year: Darren Greenhalgh is an adjunct engineering instructor; Teresa is a full-time assistant overseeing Cuyamaca College’s Hispanic Serving Institution Title III grant.

“This is such a wonderful campus,” Teresa said. “Everything I do here is aimed at helping to repay what I experienced at this great school.”

Teresa and Darren are San Diego County natives with deep roots in the East County, and both knew as soon as they started dating as students at Cuyamaca that they would get married. The first home the couple bought together was off Fury Lane overlooking the campus, and all three of their children attended the college.

The changes over the years have been many.

“It was pretty different here 40 years ago,” Teresa said. “The classes were really small, I mean really small, even smaller than they are today. There was no parking lot; you parked in the dirt area in front of the stairs leading to the administration building, over by where the bookstore is today, and if it rained, you just parked in the mud.”

There were was no cafeteria, just vending machines and a food truck that would pull up around lunch time. The campus also had no physical education facilities. The couple met in a Cuyamaca College racquetball class held at a Casa Del Oro club a few miles from school.

“I only have good memories, wonderful memories of my years here,” Teresa Greenhalgh said. “It was so small back in the day. It was like family. I don’t remember anybody ever being rude or ever being excluded.”

Even after both left Cuyamaca as young adults, they kept coming back. Teresa, who worked as a bank teller and supervisor at El Cajon Valley Bank before deciding to become a full-time mom, returned to Cuyamaca College as a student when her eldest daughter, Brittany, was in fifth grade.

“I took algebra classes so I could help her with her homework questions and supplement the teacher’s instruction.” Teresa returned again in 2010 when she was hired as a part-time clerical assistant, later working as an administrative assistant to the dean of arts, humanities and social sciences before landing in her current job.

Darren, who earned an associate of science degree in surveying from Cuyamaca, returned to serve on a Surveying Advisory Committee in 2010. The college couldn’t have found a more suitable advisor. After earning his bachelor’s degree in civil engineering and an MBA from San Diego State University, Darren went on to serve as deputy director of engineering and capital projects for the City of San Diego. Among the projects he headed was construction of the downtown library, a $187-million, nine-story structure with a 350-seat auditorium, a charter high school, special-event spaces, art gallery and more a couple blocks from Petco Park.

Like many in the Cuyamaca College family, the Greenhalghs are active volunteers. Teresa puts in some 30 hours each week as an unpaid program manager with CERT, an acronym for Community Emergency Response Team, and her program is registered with FEMA and the state and the county offices of emergency services. Darren is on the Jamul-Dulzura Community Planning Group. Both volunteered religiously with Santa Sophia Catholic Church in Casa de Oro before they moved to Jamul, and both have a long history of working with various youth groups.

With more time on his hands after recently retiring, Darren returned once again to Cuyamaca College as a part-time engineering instructor.
“My years at Cuyamaca were a great experience,” Greenhalgh said. “Cuyamaca was new, the classes were small and the support from the faculty and staff laid a great foundation for my transfer to SDSU.”
His greatest memory? “Meeting her,” he said, nodding at his wife.