College district has much to cheer about with new vice chancellor 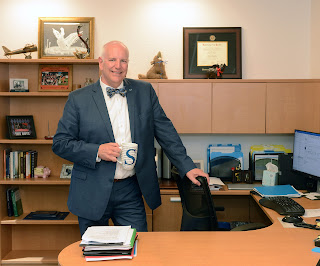 Crediting community college for setting him on a quest for learning, Sean Hancock went on to attain two advanced degrees and top posts as a college administrator, and is now the Grossmont-Cuyamaca Community College District’s first Vice Chancellor of Student and Institutional Success.

“My new post is about building and maintaining relationships, both internally and externally, and working to facilitate programs and services that will benefit student success districtwide,” Hancock said.

Before coming to the college district, Hancock was vice president of instruction and student services at Palo Verde College. When he arrived at the college, it was at risk of losing its accreditation status, and he led efforts that increased student enrollment and outcomes, stabilized the budget, built new programs and community partnerships, and launched new technology systems, regaining full accreditation status in the process. Hancock also led teams in developing programs for diverse populations, including inmates, tribal communities, high school districts, students of color and farmworkers.

It is the same spirit of inclusiveness at Grossmont-Cuyamaca that Hancock finds most appealing.

“I am inspired by the District’s commitment to championing equity-mindedness, inclusivity, civility, and social justice,” Hancock said. “Grossmont-Cuyamaca Community College District is known for innovation, and I’m excited about the opportunity to be a part of reinventing the way we deliver programs and services to today’s learners.”

Describing Hancock as hard-working and a team-builder, Chancellor Cindy Miles said he is a custom fit for his new position.

“He is a hands-on type of leader. He recognizes the profound impact that education has had in his own life, and is committed to advancing our vision of transforming lives through learning,” Miles said.

Noting that he was one of 40 chosen as a 2018-2019 Aspen Presidential Fellow for Community College Excellence - a national leadership program aimed at preparing the next generation of community college presidents - she said the district is fortunate to have a leader of his caliber.

The Visalia native, the first in his family to graduate from college, understands well the transformative miracle of community college and speaks fondly of College of the Sequoias, where he earned his Associate of Arts degree in business in 1989.

“It was at College of the Sequoias that I explored all that was available to me – drama, band, choir, serving on the Student Senate,” Hancock said. “It was there that I developed my initial thirst for learning.” 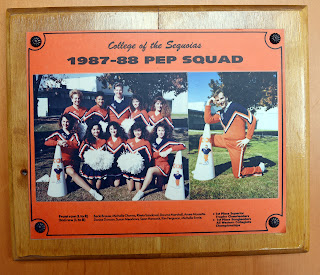 Hancock said some of his happiest memories from his time as a student at College of the Sequoias are of his experience as a yell leader. He recalled how he appeared with the squad as an extra in the ‘80s B movie, “Cheerleader Camp,” and displays a photo from that time in his office.

After community college, Hancock left Visalia for San Francisco, where he explored his entrepreneurial side, going to cosmetology school and operating his own salon.

His academic interests drew him back to the classroom and central California. He began his community college career in 1999 as the assistant to the Vice President of Administration at the main campus of San Joaquin Valley College while beginning his quest for a bachelor’s degree at Fresno Pacific University. From there, he went on to earn his MBA at TUI University in Cypress, and in 2013, his doctorate in educational administration from the University of the Pacific in Stockton.

Hancock served for 10 years as director/CEO of San Joaquin Valley College’s Modesto campus, which he helped start up in 2004.

It was during that time that Hancock went through what he describes as a reinvention of himself, even down to his sartorial choices. Ditching the conventional, he took to wearing bowties and by his estimation, has about 70 in his collection.

“It’s getting harder and harder to find bowties these days, but what can I do – I’ve gotten to be known as the guy with the bowties,” Hancock said.
Posted by Della Elliott at 1:52 PM