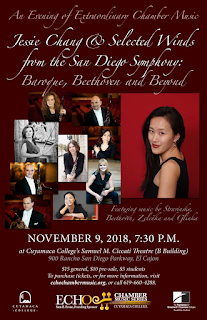 General admission tickets are $15, or $10 if bought in advance. Student tickets are $5 each. Tickets can be purchased and further information can be found at EchoChamberMusic.org. Cuyamaca College is at 900 Rancho San Diego Parkway in El Cajon, 92019.

The ECHO Chamber Music Series – ECHO is an acronym for the East County Harmonics Organization – debuted this past spring and is aimed at bringing some of the world’s top young musicians to Cuyamaca College’s Samuel M. Ciccati Theatre. Six concerts are tentatively on tap for the coming spring, including: Quicksilver Baroque (Jan. 6); a piano/viola recital with Reiko Uchida and Brian Chen (Jan. 29); the Myriad Trio (Feb. 19); the Smetana Piano Trio (Feb. 22); the Fauré Piano Quartet (March 18); and Augustin Hadelich and Orion Weiss (April 19). Hadelich is playing with the San Diego Symphony in February but is returning to the region for the April 19 concert at Cuyamaca College.
Posted by David Ogul at 11:27 AM