The odds were stacked against Margen Dishmon. A foster youth since the grandparents who were raising her passed away when she was a young teen, Dishmon found herself being shuttled through shelters and bouncing between foster homes. It didn’t take long to fall behind in her schooling. Her plans for the future were opaque at best.


“I missed so much of my education,” Dishmon said. “It really messed me up.”


How times have changed. Now 23, Dishmon graduates in June from Grossmont College with an associate degree in business administration. She already has been accepted to Cal State San Marcos, Cal State Los Angeles and San Francisco State University, and she is waiting to hear back from San Diego State University before deciding where to secure a bachelor’s degree in finance en route to a career running an organization helping foster youth find their way.

Her achievements have left an impression on many.

“Margen grew up in foster care, and she had very little support for college,” said Brian Woolsey, a Grossmont College counselor who works closely with current and former foster youth. “She faced both housing and food insecurity while at Grossmont, but she took advantage of the resources the college has, got involved with the nonprofit Just in Time for Foster Youth and worked hard to keep herself afloat financially – and to earn the grades to get into a good university. She is an amazing example of a student who set a goal and pursued it.” 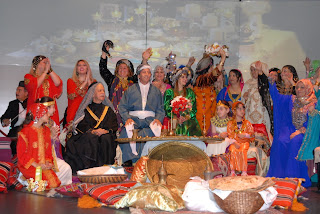 Middle Eastern Heritage Month comes to Cuyamaca College in April with a menu of cultural events highlighted by an all-day Syriac House Exhibition and an afternoon theatrical performance of storytelling and music reminiscent of a historic Baghdad coffee house.

“Cuyamaca College has a very diverse Middle Eastern community in terms of ethnicity, nationality and religion and we are using this opportunity to highlight the community’s rich cultures and traditions,” said Aklas Sheai, an Arabic language instructor who is organizing many of the month’s events.

All are free and open to the public. Included in the April lineup:


Abdi Hussein wants to protect his community. Cuyamaca College is helping him reach his goal.


Determined to pursue a career improving preventative health care in the Somali community, Hussein, 21, graduates this spring with an associate degree in university studies, behavioral and social sciences. He is waiting to hear from back from several Historically Black College and Universities (HBCU) before deciding where to pursue a bachelor’s degree in public health.


Meanwhile, he’s busy seeking every opportunity to learn more about his calling.


In January, Hussein attended the 4th Annual Making Medical Equal Conference at the University of California, San Diego, School of Medicine and a UCSD Medical Education for Diverse Students symposium aimed at expanding pathways to healthcare careers for students from underrepresented populations. 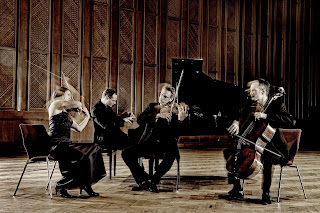 One of the world’s leading piano quartets is set to perform masterpieces by Gustav Mahler, Gabriel Fauré and Franz Schubert at Cuyamaca College’s Samuel M. Ciccati Theatre on Monday, March 18, when the Fauré Quartet takes the stage for the latest ECHO Chamber Music Series concert.

Comprising pianist Dirk Mommertz, violinist Erika Geldsetzer, violist Sascha Frömbling and cellist Konstantin Heidrich, the Fauré Quartet has earned a reputation as visionaries challenging tradition. After meeting during their studies in 1995 in Karlsruhe for the 150thanniversary of Gabriel Fauré, members realized this combination could yield new insights into an undiscovered repertoire. They have since made several critically acclaimed recordings with works by Mozart, Brahms, Mendelssohn, not to mention pop songs written by Peter Gabriel and Steely Dan. The quartet showcases its nonconventional approach with international tours, appearing at the world’s leading chamber music venues, such as Concertgebouw Amsterdam, Alte Oper Frankfurt, Teatro Colon Buenos Aires and Wigmore Hall London.

General admission tickets are $15 each, $10 if purchased in advance online, and $5 for students. Tickets can be purchased by visiting EchoChamberMusic.orgor by calling (619) 660-4288.
Read more »
Posted by David Ogul at 1:58 PM

Butterfly releases, thousands of landscape and garden plants for sale, museum tours and more are on tap when the Spring Garden & Butterfly Festival returns to the Cuyamaca College campus for its 26th year on April 27.
Several thousand visitors from throughout the region and beyond are expected to visit the college, which houses The Water Conservation Garden and the Heritage of the Americas Museum, and all three have planned an array of family friendly events. The Cuyamaca College Ornamental Horticulture Department will hold its largest plant sale of the year and Old Town Trolley Tours of San Diego will provide free, narrated rides to and from the garden, the museum and the college.
Making this year’s festival especially noteworthy: Cuyamaca College is celebrating its 40th anniversary and The Water Conservation is celebrating its 20th. Both will be hosting displays recalling their histories.
Read more »
Posted by Grossmont-Cuyamaca Community College District at 12:31 PM

Joseph Barr was looking for a new beginning. He found it at Grossmont College.


As he works toward an associate degree in economics, Barr is an academic standout . He’s planning to transfer to San Diego State University, and is determined to secure a master’s degree – if not a doctorate - before embarking in a career in finance advocating for the underserved.


His achievements were recognized with an Osher scholarship from the Foundation for Grossmont & Cuyamaca Colleges during a January awards ceremony.


Born and raised in Jerusalem, Barr grew up in an ultra-Orthodox Jewish family – his father is a Rabbi at a Yeshiva, or a Jewish academy of Talmudic learning – and attended religious school that focused on Torah and Talmud at the expense of subjects such as mathematics and science.


“Any book that wasn’t written by an ultra-Orthodox Jew was forbidden in our house,” said Barr. “I always felt like I was missing something. I was prohibited from doing a lot of stuff.”


Barr’s yearning for something new reached its crescendo in 2010. His epiphany came while traveling to the Red Sea during the Jewish holiday of Sukkot that commemorates the Exodus. “My parents were American, so I was an American citizen and I had an American passport. I knew it wasn’t going to be easy, but I decided it was time to go.”


He returned home, sold all of his belongings, bought a plane ticket and flew nearly 16 hours to Los Angeles with just $200 in his pocket, a packed suitcase and a backpack. Despite not knowing anyone, Barr landed a steady stream of retail jobs for several Israeli companies. It was a hard life.


Indeed it did. He found a better-paying job in construction, saved everything he could, then set off for a months-long backpacking trip to South America that included meeting his future wife – who later earned a master’s degree at the University of San Diego School of Law – in  Brazil.


He also picked up several languages along his journeys, including Portuguese and Spanish in South America. He’s also taking Arabic courses at Grossmont, while improving his English.


Remembering the words of a Fullerton rabbi who became a close friend, Barr resolved to further his education after returning to the United States. “Rabbi (Haim) Asa told me, ‘You need to go to a community college. You’re going to do really well, you’re going to move on to a university and you’re going to become very successful. And when you get there, I want you to help other people, like I helped you.’”


“Sadly enough, he passed away almost 5 year ago and never saw me going back to school,” Barr said. “I’m going to honor his words.”


He’s doing that through Grossmont College. Barr’s determination has left an impact on his professors.


“Joseph Barr is tenaciously committed to learning and to excellence,” said English instructor Ryan Griffith. “Seldom in my career have I worked with a student of his intelligence, curiosity, and work ethic.  He will do great things.”


Nemie Capacia, co-chair of the Mathematics Department, is similarly impressed.


“He emailed me even before the start of the semester for a copy of my syllabus and the title of the book so he can purchase it and work ahead,” Capacia said. “He was one of my students that semester who frequented my office during office hours to ask questions about homework or to clarify things that were covered in the class. He was very inquisitive and made sure he not only understood the mathematical processes on how problems are solved, but the how and why behind a mathematical concept. He was very determined to excel in my class and he did.”


Likewise, the support Barr has received in helping him reach his goal is leaving a lasting impression on him.


“This is the first time I felt like I belonged to a community since I moved to the United States,” he said.


Posted by Grossmont-Cuyamaca Community College District at 8:30 AM


Two faculty members at Cuyamaca College and a team of professionals at Grossmont College are among the academic year’s rock stars at the two East County campuses.

Rachel Jacob-Almeida, a full-time sociology professor, and Peggie Daley, a part-time English as a Second Language professor, recently received the 2019  Award for Teaching Excellence, a recognition by students who nominate faculty members.
“Our students deserve the best and that is what they receive from our colleges,” said Cindy L. Miles, chancellor of the Grossmont-Cuyamaca Community College District. “These award winners are unparalleled in their intentional and untiring efforts on behalf of our students.”

Read more »
Posted by Della Elliott at 1:12 PM No comments:

In recognition of Women’s History Month, designated by Congress in 1987, both Grossmont and Cuyamaca colleges have a number of events planned that are free and open to the public:

You can’t beat free. That’s the lesson from San Diego resident Emily Kongsima, who was working at various restaurant jobs when she discovered Grossmont College’s Office Professional Training program, a program providing the skills needed for work as an office assistant, administrative assistant or office manager.


Best of all, it doesn’t cost a dime.


“I didn’t have any money at all to go to school, but it was a free program,” said Kongsima. “You can’t get much better than that.”


After acing her classes, tutoring others, volunteering where she could and completing the program this past summer, Kongsima secured a Retiree Network Scholarship from the Foundation for Grossmont & Cuyamaca Colleges, money that will come in handy when she pursues associate and bachelor’s degrees in business administration.


Kongsima, 29, was honored with other scholarship recipients during a January 12 awards ceremony at Cuyamaca College. Meanwhile, her newfound expertise in Microsoft Excel, PowerPoint, Access, financial accounting and business communication have made her infinitely more marketable as she begins a job search after taking a break from work to care for her ill mother.

Read more »
Posted by Grossmont-Cuyamaca Community College District at 10:44 AM