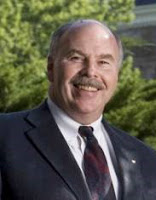 Bill McGreevy, an administrator with more than 25 years’ experience in higher education, has been appointed vice president of Administrative Services at Grossmont College.
“Mr. McGreevy’s background in educational leadership and administration, as well as specific experience in campus budget and construction management, make him an invaluable addition to the college,” said Grossmont College President Nabil Abu-Ghazaleh.


McGreevy filled the post in an interim capacity before his appointment, overseeing the construction of the college’s new Performing and Visual Arts Center, managing budget development for the college, and monitoring the work of outside vendors.
The Crest resident was hired at Grossmont College in January 2017 as dean of Arts, Languages and Communication. Between 2012 and 2017, he served as the dean of Instruction and Interim Campus Director for Red Rocks Community College in Lakewood, Colorado. Before joining Red Rocks, he was the assistant dean of the Morgridge College of Education at the University of Denver. Prior to joining the University of Denver, he was the assistant dean for Colorado Mountain College, a seven-campus community college system.
He held administrative positions at University of Missouri campuses in Kansas City and St. Louis before moving to Colorado.
McGreevy has a master’s in Higher Education Administration from the University of Missouri-St. Louis, and a bachelor’s in journalism from the University of Missouri-Columbia.
He had an earlier career in broadcasting and as a marketing director for a medical equipment company.

Posted by Della Elliott at 4:55 PM