Forget your yard signs and call campaigns – some students in Grossmont College’s dance program have turned to tap dancing to get out the vote.
Directed and choreographed by dance instructor Nancy Boskin-Mullen, “Tap the Vote” is a catchy video featuring former and current students, as well as members of a tap dance company, the California Rhythm Project.
Tapping their way around the Grossmont College campus to Sharon Jones and the Dap-Kings’ R&B cover of Woody Guthrie’s “This Land Is Your Land,” the students lend a youthful vigor to a time-honored message of American democracy.

“I was raised in a politically aware family and I had been wanting to do a piece about voting,” said Boskin-Mullen, an adjunct instructor who also teaches at Mesa College and MiraCosta College. “When I discovered Sharon Jones and the Dap-Kings R&B version of Woody Guthrie’s iconic song, everything fell into place.”

The eight dancers rehearsed for five consecutive Saturdays on Zoom, then, with permission from college officials, spent a day on campus while their instructor videotaped them on her iPhone. Like most programs at the college, the dance department is restricted to remote classes because of the pandemic, but the instructor was able to get special dispensation for the on-campus taping.

“I wanted to reflect a sense of connection to Grossmont College, so I put forth a proposal to film on campus,” she said. “It was approved with the support from Dean Joel Castellaw and Vice President of Academic Affairs Dr. Marshall Fulbright.”

Tapping individually and as a group, the dancers relay the message to vote, either in person or by mail. 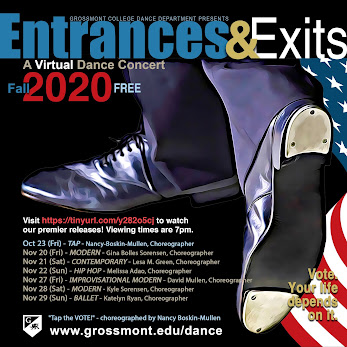 “I selected, trimmed, and labeled the video clips which was the most time-consuming part of the process, and submitted them to video editor Israel Palacio to edit,” Boskin-Mullen said. “I wanted to show this video before election day, so our timeline was short.”

“Tap the Vote” kicked off the dance department’s annual fall concert, “Entrances & Exits,” which is virtual this year with seven free performances viewable as YouTube videos. Each video premiers on a scheduled date in November, then can be watched at any time afterward at https://tinyurl.com/y282o5cj

“Response to ‘Tap the Vote’ has been great,” Boskin-Mullen said. “I am heartened by the enthusiasm students have around voting and I am thrilled to be sharing this timely message through tap dance - a form with uniquely African American roots.”

Posted by Della Elliott at 5:32 PM