Grossmont College students who are awarded a scholarship from an East County tribe get much more than the $500 to help them pay for books and supplies. They also get a connection with the tribe’s casino that can help them land a job.

Since 2018, the Sycuan Band of the Kumeyaay Nation has provided annual scholarships for 12 Grossmont College students who are majoring in Culinary Arts, the Administration of Justice, or Hospitality and Tourism Management. Those fields directly tie into the kinds of jobs held at the Sycuan Casino, with more than 1,700 employees, including chefs, security guards, or hotel and casino managers.

Read more »
Posted by Grossmont-Cuyamaca Community College District at 10:47 AM


Cole Atencio said he’s known since he started high school that he wanted to be an actor. His experience at Grossmont College’s Theatre Arts department is giving him the on-stage experience to help him hone his skills.

Cole is one of four students who will be appearing in “The Mad Ones,” the latest production of the Theatre Arts department that will be streaming online April 8-17. The play is directed by Geno Carr, a renowned actor and director who is a faculty member at Grossmont College.

Cole, a 20-year-old La Mesa resident, said he was bit by the acting bug when he saw a play at Helix High School that was performed for new students and parents during a school fair as he was about to start ninth grade. He still remembers the play: “Zombie Prom.”

“Watching those people on the stage who were my age really got me interested in theater,” Cole said.

His parents had encouraged him to attend a university, but the death of his father at the start of his senior year of high school caused Cole to consider other options for his education.

“I started thinking, ‘What do I want to do?’ I still wanted to pursue an education, but I didn’t want to make the commitment to a four-year school,” he said.

Read more »
Posted by Grossmont-Cuyamaca Community College District at 11:38 AM

The leaders of the 10 community colleges in San Diego and Imperial counties issued a statement today urging their employees and students to get a vaccination protecting them against COVID-19 as soon as they are eligible.

The colleges, which serve more than 200,000 students in the two-county area, have been offering mostly online learning for the 2020-21 academic year because of the pandemic. Only a limited number of classes and labs that train essential workers have been offered at the college campuses.

“Widespread vaccinations will allow our colleges to start reopening our campuses this fall and to continue to offer the top-quality education that our students want and deserve,” says the statement, which was endorsed by leaders for the Grossmont-Cuyamaca, Imperial, MiraCosta, Palomar, San Diego and Southwestern college districts. 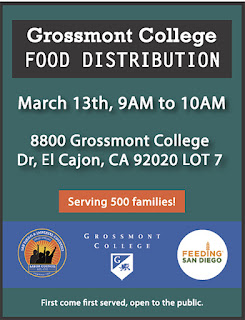 Grossmont and Cuyamaca colleges are continuing to do their part to address food insecurities arising from the pandemic with more food distributions for students and the public, including  East County’s first Labor Council Community Drive-Thru Food Distribution from 9 -10 a.m. Saturday, March 13.

The San Diego & Imperial Counties Labor Council’s first-come, first-served event is open to the public and is expected to serve 500 families. The distribution at Grossmont College, being held in partnership with Feeding San Diego, is the first that the council has held in East County.

The contactless food distribution will take place in Lot 7 at Grossmont College. Recipients must be in a vehicle to receive food, with one family per vehicle.

Read more »
Posted by Della Elliott at 4:37 PM No comments:

April Holman started working at Cuyamaca College a mere three weeks before the COVID shutdown last March, but she has proven herself to be so integral to the campus that she has been honored with the President’s Outstanding Leadership and Service Award for Classified Professionals.

The Grossmont College alum and administrative assistant to Vice President of Student Services Jessica Robinson was lauded at convocation. Previously an administrative assistant to Grossmont College’s dean of Admissions & Records and Financial Aid for 3 ½ years, Holman is credited for helping the streamline the process to get $1.4 million in emergency aid to Cuyamaca students hard hit financially by the pandemic.

Read more »
Posted by Della Elliott at 10:11 AM No comments: