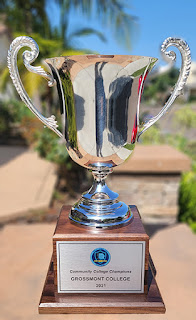 Scott Graham and Gerald Wolf embody the excellence of the Computer Science and Information Systems program at Grossmont College. After all, what else can you say about a pair of computer programming students who, at the last minute, decided to enter the 2021 SoCal Cyber Cup Challenge and ended up taking top honors and winning $5,500 in scholarships for the college?

“Honestly, neither of us thought we’d do this well,” Graham said of the two-person Grossmont College team, dubbed Reverse Shells By the C-Shore. “I mean, there were only two of us. The average team had six to eight people. But it turned out to be an absolute success on so many levels.”

The 2021 SoCal Cyber Cup Challenge was held from February 15 through May 31. Sponsored in part by the Department of Defense, the 12th annual SoCal Cyber Cup is aimed at providing extensive training and mentorship to participating students interested in a future in the growing field of cybersecurity.

“It was a last-minute situation but they just took the idea and ran with it,” computer science Professor Hau Nguyen and cyber team coach said of Graham and Wolf. “Their success Illustrates how the hands-on, practical skills and lessons students are learning at Grossmont College can be used and applied in the real world.”

The SoCal Cyber Cup wasn’t the first time Grossmont College has fared well. Competing in the National Cyber League, Grossmont ranked as high as 16th in the Western United States as recently as 2020 through challenges in such areas as Cryptography; Password Cracking; Log Analysis; Network Traffic Analysis; Wireless Access Exploitation, and more.

Computer Science and Information Systems degrees and programs at Grossmont College include Computer Programming, Cybersecurity and Networking, Web Design, and Information Technology Support Specialist. Graham, who is transferring this fall to UC Santa Barbara with a 3.8 GPA, is pursuing a bachelor’s degree in computer science and a career in cybersecurity.

It’s a field that intrigued him while serving in the military for eight years – five years with the Marines and three years with the California Army National Guard, the latter of which included being stationed as an Army sniper in the Middle East.

“The impact you can have by being in cybersecurity is where it’s at,” Graham said. “It was just something I needed to pursue after I got back home.”

The federal Bureau of Labor Statistics projects the number of computer information security analysts to grow by nearly 41,000 jobs nationally – for a total of 31% – during the 10-year period ending in 2029. In California, information security analysts are earning an average annual wage of approximately 126,000. Web designers and digital designers with just an associate degree can earn as much as $80,000 or more annually in San Diego County.

After settling in Santee, Graham made the logical choice and enrolled at Grossmont College.

“It was a great decision to come here,” he said. “I had nothing but great professors, not just in computer science, but also for math. People who are determined to help you out and make sure you get it.”

Posted by Della Elliott at 4:30 PM